Donald Trump and Democratic rival Joe Biden have dueled over Florida, a key state for the Republican's pathway to another term, ahead of the November 3 presidential election.

Both campaigned in Tampa, Florida, hours apart, but painted radically different visions of the United States.

Trump celebrated a new federal estimate that the economy grew at a stunning 33.1% annual rate in the July-September quarter. It is the largest quarterly gain on record, which makes up ground from a record slump at the start of the coronavirus pandemic.

"Thanks to our policies, America is experiencing the fastest, the biggest recovery. We’re having the best recovery anywhere in the world, no other country - small or large - is recovering like us," Trump told his supporters.

However, economists have warned the economy is weakening again as confirmed COVID-19 cases surge, hiring has slowed and federal stimulus help has largely run out.

Biden, in a statement, criticized Trump over the report. ``The recovery is slowing if not stalling,'' he said.

Instead of speaking to a crowd directly, as a coronavirus preventative measure, Biden held a drive-in rally where attendees remained in their cars.

Biden slammed the president as irresponsible, saying 'Donald Trump has "given up" on coronavirus.

He told supporters: "The heart and soul of the country is at stake right here in Florida. It's up to you! You hold the key! If Florida goes blue, it's over. It's over!"

Trump however told the cheering crowd a coronavirus lockdown under Biden would banish normal life and he promised never to lock down the country again.

Trump is holding three rallies on Saturday in Pennsylvania before launching on a whirlwind tour of battlegrounds including Florida, Michigan, Georgia and Pennsylvania.

More than 80 million Americans have already voted, absentee or by mail. 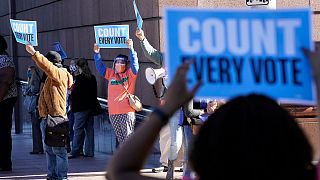