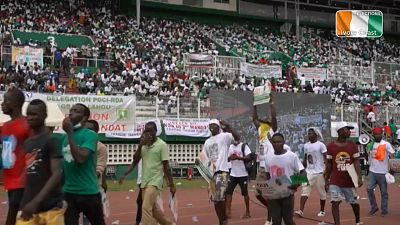 Pascal Affi N'Guessan, President of the Ivorian Popular Front and current presidential candidate, addressed his supporters, "This phase of civil disobedience aims to prevent the delivery and distribution of any election materials, prevent the display of election posters, prevent campaign rallies, prevent the distribution and collection of voter cards. To demonstrate in all forms, and by all appropriate means, opposition to the ongoing electoral coup d'état."

The clashes began Friday when young Affi N'Guessan supporters erected barricades on the roads, to express the opposition's slogan of "active boycott" of the "electoral process" to "prevent the holding of any operation related to the election" on October 31.

In spite of the presence of the police force, numerous roadblocks held by young opposition supporters prevented traffic on the two roads leading to the prefecture.

As the main political opposition camps joined forces to denounce and boycott the current president’s perceived unconstitutional candidacy of the upcoming elections, supporters on both sides — often aligned by ethnicity with the Dioulas for Ouattara and the Agnis for Affi N'Guessan and Laurent Gbagbo, bumped heads in conflict in Broukro, a village on the outskirts of Bongouanou.

According to local witnesses, the conflict saw many shops and restaurants looted and burnt, several cars set on fire and also resulted in at least 2 deaths — and even the burning down of the residence of the main opposition political candidate himself, Affi N'Guessan in Bongouanou was burned down.

In some areas, hundreds of pebbles, broken bottles and various objects, which were used as projectiles by both sides, littered the ground.

Both communities suffered losses and each side denied culpability.