The Islamic State group claimed the August killing of six French aid workers and their two local guides in Niger.

The NGO workers, aged between 25 and 30, were visiting the Koure National Park, a popular nature reserve which sits 60 kilometres (37 miles) from Niger’s capital Niamey.

The statement, issued in the Islamic State publication al-Naba on Thursday and authenticated by US monitoring group SITE, said that the eight were killed after their capture in a “blitz attack”.

IS also said the attack was “a major security lapse” for France, which has more than 5,000 troops stationed in the Sahel region of West Africa to fight extremist groups.

French anti-terror prosecutors have already said that the attack appeared to be a “premeditated” strike against Westerners.

It is unclear if the French aid workers and their NGO Acted were specifically targeted.

French investigators have been sent to Niger to carry out the probe.

French President Emmanuel Macron has described the killings as “manifestly a terrorist attack” and said there would be repercussions.

The reasons behind this year's massive floods of the Niger River 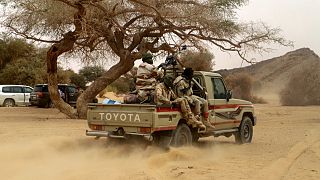 The reasons behind this year's massive floods of the Niger River