The Runways are Ready

Ready for takeoff, commercial flights in Angola which resumed this week following their suspension in early March at the onset of the Covid-19 pandemic — with only domestic flights available for booking as of now.

The first highly anticipated roundtrip flight between Luanda and Cabinda on Monday was surrounded by confusion at the airport with more passengers as there were seats.

Nevertheless, domestic flights will continue with a round trip to Soyo, in Zaire province on Wednesday and a two-way connection between the capital city and Huambo on Thursday.

International flights are scheduled to operate next Monday.

This marks a huge step towards economic recovery that also coincides with a rise in the country’s coronavirus testing capacity as for the first time more than 1,800 tests were carried out in a single day — as reported by officials on Tuesday.

Tests that resulted in the confirmation of 51 new infections which sees the national caseload at nearly 3,500 with 136 deaths since the start of the global coronavirus health crisis.

A situation to which the newly opened Walter Strangway hospital unveiled this week by President João Lourenço, in Cuito, the capital of the province of Bié, will now be able to provide assistance.

Along with several other medical specialities available at this new hospital in the centre of Angola — such as dialysis procedures undergone by the first patients on Monday. 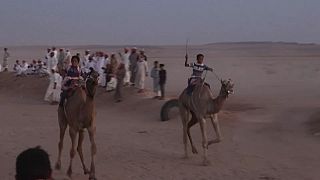 Camel Racing Back on in Egypt Post Covid-19 Lockdown Hiatus

Camel Racing Back on in Egypt Post Covid-19 Lockdown Hiatus