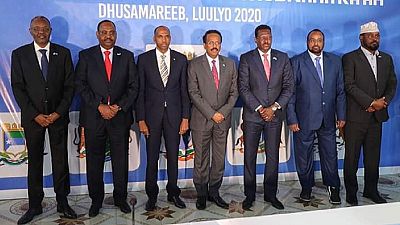 Somalia’s federal government and leaders across the federal member states, FMS, on Wednesday agreed to hold timely national elections as the tenure of the incumbent president and parliaments run out later this year.

A technical committee will be nominated to iron out details for the nature of the elections whiles the leaders are expected to reconvene at the same venue to complete modalities for the electoral process.

President Mohamed Abdullahi Farmaajo had been in the in the central town of Dhusamareb in the Galmudug region, where he joined leaders from the five member states for a consultative forum on the political and security aspects of the national government.

The president’s press secretary said the leaders had also committed to nominate a technical working group to deliver recommendations on how the elections will be held. Two weeks ago, they reiterated the fact that the country was not ready to hold ‘one person – one vote’ elections. 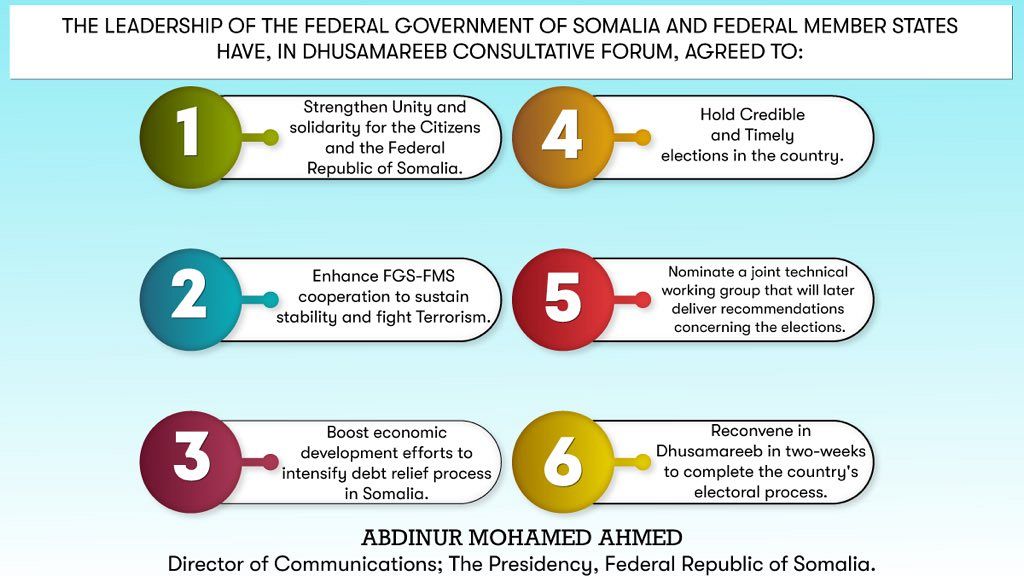 In a commitment to the fruition of those talks, we appreciate and support its outcome. We also look forward to the next rounds of #DhusamarebTalks to further the dialogue and find a shared solution to the national issues at stake.

Regional presidents in Somalia are unanimous in their position that federal level polls be held on time in the wake of postponement suggestions by the electoral body.

They held that one-person, on-vote system was still not feasible in the country but added that a model for the elections should be agreed upon based on consensus between all stakeholders.

They also invited the president and prime minister for talks to be held in Dhusamareb. The federal government has yet to react to the request. The five presidents issued a statement after a meeting over the weekend in the central town of Dhusamareb in the Galmudug region.

Over in the semi-autonomous Somaliland region, the Horn Diplomat news portal, reported on Sunday that political parties had agreed to hold elections this year. The elections body has been given 14 days to prepare a road map for the vote.

BREAKING: Five Somali regionals have ruled out one person one vote system in the next election, called for an alternative, inclusive model that allows upcoming election to take place within scheduled time. The 5 invited M_Farmaajo and SomaliPM for talks to be held in Dhusamareb pic.twitter.com/wuk6EL3E2v

Presidents from Somalia’s Federal Member States, FMS, are meeting today in the central town of Dhusamareb in the Galmudug region.

Reports indicate that key issues to be discussed with the federal representatives are the electoral process and relations with federal government. There has been reports of tensions between the regional leaders and the Mohamed Abdullahi Farmaajo led federal government in Mogadishu.

The host president, Ahmed Abdi Karie, posted on Twitter that the Consultative Meeting is for the leaders to have a unified position on national elections.

Late last month, elections commission head, Halima Ismail Ibrahim, told federal lawmakers that prevailing conditions made it impossible to hold polls. She said the earliest an election could hold in the country was in March 2021.

In her address to the lower house of parliament, she presented two options – an election based on biometric registration which would be possible in August 2021 or a manual-based registration that can be held in March 2021.

A mandate extension for the current government has been strictly rejected by the opposition with the President and his Prime Minister also recently stating their disagreement with an extension.

Somalia currently is divided into six regional states. Puntland, Galmudug, Jubaland, South West State, Hirshabelle and Somaliland. The later continues to hold itself out as an independent state, though officially it is a semi-autonomous part of Somalia.

BREAKING: Five Somali regional leaders’ meeting opens in the central town of Dhusamareb. Among the key agendas to be discussed is electoral process and relations with federal leaders as some of the regional figures expressed serious differences with pres M_Farmaajo and his govt. pic.twitter.com/tn9t1yJvEk