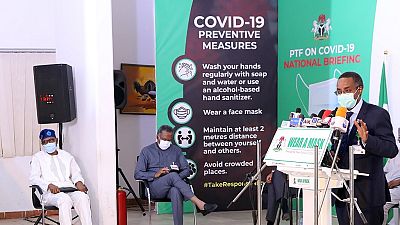 Nigeria, Africa’s most populous country, as at end of June 2020 was Africa’s third most impacted country only behind South Africa and Egypt.

As Africa’s biggest economy, the federal government has continued to enforce regulations across the board even though most state governments have moved to relax restrictions.

The national response is led by the Presidential Task Force, PTF, led by SGF Boss Mustapha along with a national coordinator and relevant ministers – chief among them, Health, Foreign Affairs and Education ministries. At the heart of the response is the Nigeria Center for Disease Control, NCDC.

This article is dedicated to covering events from the country throughout the month of July. Our May 2020 page and June 2020 coverage also gives you a rundown of major developments.

Seven states along with the capital Abuja had recorded over 1,000 cases since the index case was recorded. Lagos by a mile is the most impacted state with 12,427 cases. FCT has 2,576 whiles Edo and Oyo’s 1,731 and 1,726 tallies respectively complete the top four slots.

Rivers, Delta, Kano and Ogun states complete the 1000+ list whiles Kaduna is inching towards joining the club. The state currently has 989 cases. 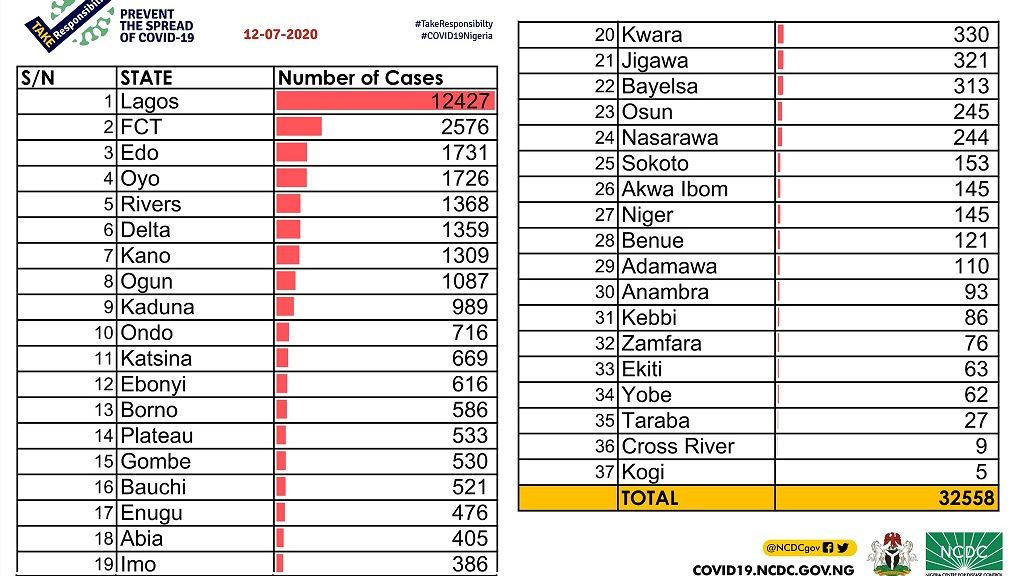 The federal government has launched a diagnostic kit, which can detect the causal agent of COVID-19. It is known as RNASwift,

The kit was outdoored tt a press conference on Tuesday by the National Biotechnology Development Agency (NABDA), the agency that developed it.

NABDA director-general Alex Akpa, told journalists the RNASwift test kit is an indigenous diagnostic test kit designed, developed and validated in Nigeria for the identification of the causal agent – SARS-Cov-2 – which causes COVID-19.

He stressed that the kit will not only revolutionalise Africa’s PCR-based COVID-19 testing but also expand the capacity by at least, 50 times. Another advantage it presents was the reduced cost by over 500 percent as compared to the conventional kit in use.

He said the diagnostic kit is “very accurate and sensitive’’ and competes favourably with conventional and commercially available kits for the diagnosis of COVID-19.

The project was undertaken in collaborative effort between NABDA, Nigerian Centre for Disease Control (NCDC), and Nigerian Institute for Medical Research (NIMR). It is not known as yet when it will be deployed to test samples.

On the education front, whiles the federal government has put off the reopening of schools, the canceling of the West Africa Examination Council, WAEC; exams has received a high level condemnation.

Former Vice-President Atiku Abubakar has kicked against the move saying that Nigeria stood to lose. “As a parent and investor in the education sector, I wish to register that the Nigerian government’s policy of unilaterally cancelling the West African Senior School Certificate Examination, held annually by the West African Examinations Council, is not in Nigeria’s best interest.

“At a time of the global COVID19 pandemic, it is understandable that an abundance of caution be put in place to save lives. However, caution, without consultation, and thoughtful action, may be counterproductive.

“1.5 million Nigerian youths write the West African Senior School Certificate Examination annually. To abruptly cancel this examination is to set back our nation’s youth, and place them behind their contemporaries in other West African countries,” he said in a Twitter thread on Friday.

In giving an alternative to the cancellation, the former veep wrote: “We could mobilise all available public & private infrastructures, including primary schools, stadia, and cinemas, for the examinations. In the alternative, the Federal Government can prevail on WAEC to have staggered examinations with a different set of questions for each shift.

“Doing so will allow WAEC Nigeria to implement social distancing and achieve the goal of carrying out the examinations. A win-win scenario.”

We are getting ready to start the hand over event of critical medical equipment from #Ecowas /OoasWaho to NigeriaGov to help support #COVID19 response in #Nigeria. pic.twitter.com/9baEU9Mw5C

Nigeria crossed the 30,000 mark on Tuesday when the NCDC reported that caseload had hit 30,249 in pattern with an increase of above 400 cases daily.

Government also announced that federal schools will not be reopened whiles regional examination for final year students have also been cancelled.

Minister of Education, Adamu Adamu addressing the media at the PTF briefing in Abuja said the West African Examinations Council (WAEC) cannot determine the resumption date of schools for Nigeria.

Subsequently, no Nigerian school will participate in the WASSCE earlier scheduled for August 5 to September 5. Adamu stressed that he would prefer that Nigerian students lose an academic year than to expose them to dangers. Ghana has said it will go ahead with the examinations.

The Chinese embassy on Tuesday also took a swipe at a group of lawyers that filed a suit seeking damages against China over the coronavirus pandemic.

A statement by the press secretary of the Embassy of China in Nigeria called the action “frivolous” and “shoddy.” It argued that China put its best food forward at the outset of the pandemic and that it was equally impacted as any other nation.

“COVID-19 has caught the whole world by surprise. China, like other countries is a victim. Confronted by an unknown virus, we have acted responsibly to protect people’s life and health and safeguard global public health.”

It concluded by stressing its victimhood and called on the lawyers to engage in actions that boost ties between the two nations rather than dance to the tune of a certain unnamed country to “hype up the situation.”

Statement by Press Secretary of the Embassy on some Nigerian lawyers' attempt of filing frivolous lawsuits. pic.twitter.com/decFormTiX

Domestic flights started operations in the country after months of suspension. The restart is according to the federal government’s three-tier reopening scheme announced by aviation minister Hadi Sirika a week ago.

The Civil Aviation Authority shared photos of the first flight – operated by Arik Air – with passengers going through formalities and boarding at the Murtala Mohammed Airport in the commercial capital, Lagos.

Queues are formed with strict physical distancing rules from the check in counters through to the boarding area as temperature readings are also taken. All passengers are wearing masks.

The Environment Department of the Federal Airports Authority of Nigeria on Tuesday decontaminated the Domestic Terminals of the Nnamdi Azikiwe International Airport, Abuja in preparation for the resumption of domestic flights.

The full reopening will span a week with Abuja and Lagos reopening today. Others will reopen on July 11 (Kano, Port Harcourt, Owerri and Maiduguri) and the rest on July 15, according to the government.

Schools across south western Oyo State have resumed as of today despite protests by the federal government insisting that conditions were not right for such a measure.

Local media reports suggest that strict virus prevention measures were being implemented with the return to school. All students, pupils are wearing some form of mask or face shield.

Temperatures are taken before learners are allowed into classrooms and there are handwashing points stationed at vantage points. There is also distancing between seats in the classrooms.

Others states have held off reopening of schools despite a progressive lifting of strict lockdown measures.

Over the weekend, reports emerged that Ebonyi State governor David Umahi had contracted the virus along with some of his aides. He joins the likes of Rotimi Akerodolu of Oyo and Delta State’s Ifeanyi Okowa – who are still receiving treatment after recent infections.

The full reopening will span a week with Abuja and Lagos opening on July 8. Others will reopen on July 11 (Kano, Port Harcourt, Owerri and Maiduguri) and the rest on July 15, the government said on its official Twitter account.

On the subject of resumption of international flights, Minister Sirika said: “Date for international (flights) to be announced in due course. Bear with us, please.”

I am glad to announce that Abuja & Lagos airports will resume domestic operations on the 8th of July, 2020. Kano, Port Harcourt, Owerri & Maiduguri to resume on the 11th. Other airports on the 15th. Date for international to be announced in due course. Bear with us, please ??????

Today marks the first day of the eased lockdown Phase II. “The primary aim of Phase Two was to sustain the gains of the earlier Phase in terms of pandemic control, while allowing additional sectors of the economy to restart.

“This will help achieve the desired balance between saving lives and ensuring that the wellbeing and livelihood of citizens are protected, the PTF said in a statement detailing the raft of new directives. The key ones being:

His disclosure comes barely 24-hours after that of Ondo State governor, Rotimi Akeredolu, who said he was asymptomatic and self-isolating.

The list of infected governors thus includes Abia State governor, Okezie Ikpeazu, who also confirmed being infected early this month. Governors Nasir el-Rufai of Kaduna, Senator Bala Mohammed of Bauchi and Seyin Makinde of Oyo, have all recovered from the virus.

My wife and I have tested positive for COVID-19. We are well and continuing with our isolation/medication. We thank you all for your continued prayers for us and our daughter. pic.twitter.com/NzBWB96Q91