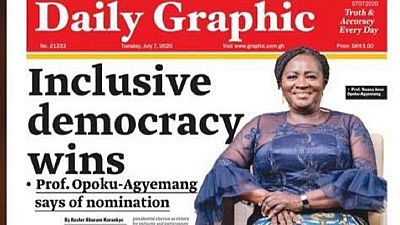 Jane Naana Opoku-Agyemang has been selected by former Ghana president John Mahama as his running mate for this year’s presidential election.

The 69-year_old Opoku-Agyemang, is a former education minister and university professor. She was also the first female vice-chancellor of the University of Cape Coast in 2008.

The former president called her “God-fearing, a distinguished scholar, a conscientious public servant and a role model”.

The Dec. 7 poll will pit Mahama, who governed from 2012 to early 2017, against his successor, President Nana Akufo-Addo, who defeated him in the late 2016 election.

The presidency has changed hands repeatedly between the ruling New Patriotic Party, NPP and ex-president Mahama’s NDC since 1992 in a series of peaceful elections that have cemented Ghana’s reputation as one of West Africa’s most stable democracies.