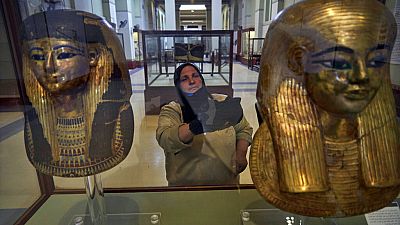 Egypt’s Royal Carriages Museum project is ongoing. After years of closure, the museum will reopen its doors to visitors to admire the exquisite royal carriages of members of the Mohamed Ali family.

Restoration and development work will be completed soon, with a reopening slated within the next two months.

Mennatallah Magdy, secretary of the royal carriages museum relishes the prospect of reopening: “This museum contains royal carriages since the time of the khedive (viceroy) Ismail Pacha to King Farouk.

“The most important carriage in the museum is this carriage, which was given as a gift from the French empress Eugénie and her husband emperor Napoleon III, at the inauguration ceremony of the Suez Canal.”

On display are some of the 20th century’s most luxurious, fascinating carriages made by veteran designers who spent their lifetime making unique carriages only dedicated to the royal family.

Heba Galal, restorer at the royal carriage museum: “This museum includes 74 carriages, all of them were completely damaged. The restoration department made a lot of effort to restore them for visitors.”

According to the government, the restoration works cost up to 63 million Egyptian pounds, an equivalent of 3.9 million US dollars. This shows the Egyptian government’s support for traditional antiquities.

Ahmed Samir, restorer working on metal pieces spoke about the joy oh his work: “Restoring this carriage needed a group of specialists who focus on restoring fabric, glass, wood, metal, and leather. All the carriages we had were in a very bad conditions.”

The museum has been closed since 2001 for renovation. It was established during the reign of Khedive Ismail. The restoration has brought the place back to life after been neglected.