By the time the public health officials reached a Maasai community not far from Nairobi, Julius Oloiboni had already mobilized everyone to protect themselves and others against COVID-19.

Mr Oloiboni, a Maasai elder, and the 30 members of his community periodically move with their cattle between Nairobi and Kajiado counties for grazing. But when the first case of COVID-19 was confirmed in Kenya, the government put the city on a lockdown, including semi-nomadic groups like Mr Oloiboni’s, thus curtailing their movement to new grazing areas.

Mr Oloiboni and his family had been following the news of the highly infectious virus on the radio and their mobile phones. The Ministry of Health, the World Health Organization (WHO) and partners are blanketing the country through TV, radio and digital channels with messages that implore communities to take precautions along with what actions would help protect them.

With the warnings in hand, the community set up handwashing stations in their makeshift village. They stopped family members from interacting with each other and stopped all movement out of the village except for the herdsmen who take the cattle to the grazing fields.

In the densely populated informal settlement of Kawangware, inside Nairobi, Judy Emeza brought her three children for a COVID-19 test. She had heard through the radio about a free mass testing campaign in her neighbourhood, where the virus had started to spread.

“Corona has reached Kawangware. That is why I want us to get tested,” she says while waiting to be tested, with a long line of people behind her. “If I am told I have the disease, I will follow what doctors will tell me to do.”

Others in her community are sceptical of whether the disease is real, largely due to the myths and rumours circulating via social media.

“I don’t know, man. You people are confusing and scaring us,” John Waweru, a bus driver, tells Beatrice Lugalia, a health promotion officer who is overly busy these days in countering the myths by sensitizing communities through visits and radio programmes and encouraging testing. “Is it true that the nose swab goes all the way to the brain? I don’t like that.”

“That’s not true,” Ms Lugalia responds. “It is like an ear bud. It is soft but has to be long enough to reach the rear of your nostrils. It is not painful, just a little uncomfortable.”

In the Old Town area of Mombasa in southern Kenyan, which is currently a hotspot of the virus, a man named Ahmed is the only person to show up for a recent day of free testing. His community has refused to be tested. His tightknit enclave of Swahili people fears that testing positive will create stigma and take family members into an isolation facility where they can’t be visited by loved ones. The government has since changed tact and now promotes home-based quarantine.

But a few kilometres from the Old Town, traders at the Kongowea market chant that they need to be tested, and quickly, so that the spread of the virus does not disrupt their business.

“We interact with long-distance truck drivers from Somalia, Uganda and Tanzania. Many of them are testing positive. So, we cannot say we are all safe. We must be tested,” says Kevin Siro, a grain seller.

In the far-flung areas of Kenya’s long porous boundary with other countries, communities like Mr Oloiboni’s and Mr Siro’s are not hesitating to support the work of the public health authorities. For instance, people are calling to report family members who have crossed from Somalia on trade missions and have tested positive for COVID-19. And along the border with Tanzania, several communities prohibited cross-border movement among themselves before the government formally closed all borders.

Through the Ministry of Health, WHO is capitalizing on 21 community radio channels throughout the country to relay COVID-19 messages and conduct debates and discussions on the disease and its spread. A recent survey by the Kenya Bureau of Standards found that 100% of the country’s population had heard of COVID-19 and the safety messages from the government and partners, with 82% of them hearing it on the radio.

“Community engagement is critical in this response,” says Dr Rudi Eggers, WHO Kenya Representative. “And there is no one tactic around it. We have to try many things and that will push them to take action and protect themselves from the virus.” 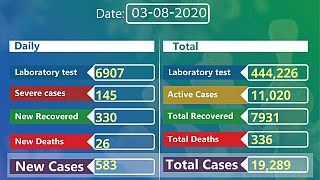