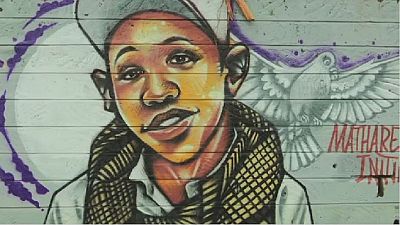 A Kenya policeman has been charged with the murder of a 13-year old boy while enforcing COVID-19 curfew order.

Officer Duncan Ndiema Ndiwah, who is accused of shooting Yasin Hussein Moyo on March 30 on a balcony at his parent’s home, denied the charges Tuesday.

“This is a battle like no other battle because we know very well that our client is not the person, our client’s gun is not the gun that discharged the bullet”, Defence lawyer for the accused, Danstan Omari said.

This is a battle like no other battle because we know very well that our client is not the person, our client's gun is not the gun that discharged the bullet.

Proceedings were held in a makeshift tent because of the coronavirus pandemic.

The death of Yasin Hussein Moyo has sparked widespread protests in the East African nation along with calls for an end to police brutality. The victim’s mother likened his son’s death to that of George Floyd in the United States.

‘‘The murder of George Floyd shows that the police do not care about people’s lives and thus act with impunity as they cannot face justice. The death of Floyd at the hands of the police is very similar to my son’s. This has been going on for too long and it has to stop and the police should respect the law. They are not allowed to kill without a reason in the first place”, Hadija Hussein said.

Rights activists claim that 19 people, all from low-income areas, have died from police enforcement of the curfew, including Yasin Hussein Moyo.

In recent weeks, hundreds have turned out to protest in solidarity with those allegedly killed by police in Kenya, as well as the killing of George Floyd in the United States.

Kenya’s Independent Policing Oversight Authority said it is probing another six deaths allegedly linked to the police since May 29th.