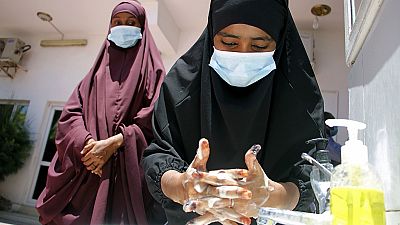 The al-Qaeda-linked extremist group in Somalia has unveiled a COVID-19 isolation and care facility, a sign that the group is taking seriously the pandemic that continues to spread in the fragile country.

Al-Shabab announced Friday that the facility, which includes a round-the-clock hotline, has been set up in Jilib, a major stronghold of the extremist group in southern Somalia.

“I am urging people with the disease symptoms to come to the medical facility and avoid infecting other Muslims,” Sheikh Mohamed Bali, a senior al-Shabab official and a member of the group’s ad hoc COVID-19 response committee, said in a speech broadcast by the group’s radio arm Andalus.

When The Associated Press called al-Shabab’s COVID-19 hotline, a man who answered said the care facility is “open for all people.”

He declined to say whether they had any virus cases but said the facility — set up in a building that once housed the United Nations children’s agency in Jilib — has all necessary equipment to isolate and treat patients.

For months, Somali health officials have warned that areas controlled by al-Shabab in central and southern Somalia could be at high risk for the virus’ spread. The extremist group has resisted assistance from the government and international health organizations in this and past crises including drought.

No information was immediately available about any virus cases in al-Shabab strongholds that remain off-limits for health workers and authorities, or how COVID-19 cases would be confirmed.

The Horn of Africa nation has more than 2,500 confirmed virus cases and has one of the world’s least-equipped health systems after years of conflict and poverty, leading to fears that untold numbers of cases might be going undetected.

A local radio station in the country reported that a number of Somalis including government officials had left the country in the wake of COVID-19 spread especially in the capital Mogadishu.

The station added that among the top government who had been evacuated was Minister of State for Foreign Affairs, Abdulkadir Ahmed Kheir, it said the Minister held American citizenship.

The development was confirmed in a tweet by a senior diplomat at the Foreign Affairs Ministry. Ali Abdi Ali Hoshow said 160 Somali diaspora had left for their second countries – specifically mentioning Canada, United States whiles others headed for Europe.

The news has drawn the ire of Somalis on Twitter many of who chastised the officials and the laws that allowed them to behave in such a manner.

President Mohammed Abdullahi Farmaajo also held American citizenship till last year when he denounced it. At the time analysts said it was strategic for his re-election bid whiles others largely applauded him and asked other officials to follow suit.

It is frustrating, they come to #Mogadishu to earn money and profit from positions!
160 #Somali diaspora have left this evening from Mogadishu, returning to countries in #Europe,#USA & #Canada to flee our people & our beloved country for fear of the epidemic of the #COVID19. pic.twitter.com/HNXkfdXoFQ

Somalia’s president has promised his Kenyan counterpart a “thorough investigation” into the deadly crash of a Kenyan plane carrying medical supplies in Somalia, while one Somali official asserts that the aircraft was shot down. Six people on board were killed.

The Kenyan Civil Aviation Authority on Tuesday said the twin-engine plane with African Express crashed Monday afternoon on approach to Bardale “under circumstances we are yet to confirm.”

A projectile fired from the ground hit the plane as it approached the airstrip in Bay region, Ahmed isaq, a local official with the Southwestern State regional administration, told The Associated Press.

The airstrip is a base for the Ethiopian military under the multinational African Union mission, which is combating the al-Qaeda-linked al-Shabab extremist group. The group controls parts of rural southern and central Somalia. There was no immediate comment from Ethiopian authorities Tuesday.

The plane had left Somalia’s capital, Mogadishu, and stopped in Baidoa before going on toward Bardale, the Kenyan statement said. Kenyan authorities said they were in contact with the Somali Civil Aviation Authority.

Somalia is recording a spate of double digit deaths since after mid April 2020, a situation which has led to concerns among relevant authorities.

Mayor of the capital Mogadishu, Omar Filish, is quoted by local media as saying that the administration had recorded 500 deaths spanning a two week period: from 19th of April to 1st May.

The Mayor adds that he believes that most of the deaths were due to coronavirus. He added that the highest buried numbers in a day is 49 as the lowest is 22.

But he is not alone in expressing such concerns, days ago Information Minister Mohamed Hayir Mareye was also on record as saying all deaths in Mogadishu were as a result of COVID-19.

Officially, however, Somalia has recorded 601 confirmed cases of COVID-19 with 28 deaths and 31 recoveries according to John Hopkins University tallies valid as of May 2, 2020 at 9:30 GMT.

The country’s case count is one of the highest in the East, Horn of Africa region where neighbouring Djibouti tops the standing with over 1,000 cases.

East Africa tallies as of May 2:

Mogadishu main mosques started applying social distancing in prayers to prevent the spread of #COVID19. This is the Mogadishu's “Isbahaysiga Mosque” this Friday, where less number of people attended Friday Khudba and almost everyone also had a FaceMask. #Somalia pic.twitter.com/lJedWqGuSY