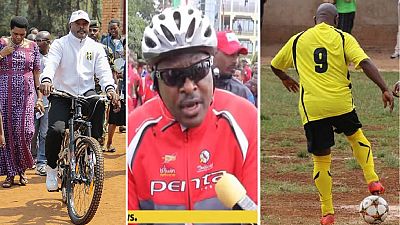 Pierre Nkurunziza on June 8 joined the list of African leaders who died whiles in office. He entered the category at a time he was lacing – maybe unlacing – his boots to leave office. Death caught him in office.

Aside the news of his loss to cardiac arrest according to the official government account, you are likely to find conspiracy theories about what exactly led to his demise, some reports pointing to COVID-19.

Nkurunziza articles have since 2015 being synonymous with his refusal to step down, the controversial third term, the ensuing chaos – bloodshed and displacement, a 2018 referendum and his decision to quit even when he could have carried on.

But in this article, we sit out the over-reported politics of Nkurunziza over his 15-year reign but focus rather on the lighter side of the president – sides which have often been mired in some amount of controversy – we look at the rider and footballer in the former president.

Ascending to power at the age of 40, he was undoubtedly one of the youngest across the continent at the time. He rose to the role from being a rebel leader but one that came in with sporting credentials.

Nkurunziza was a former sports teacher at a university. A Reuters report described him as a lifelong fitness coach and football enthusiast. As president, he still played football and coached his team, Halleluya FC. He often wore the club’s track suit during outings.

But that came with its own set of controversies, a key one being how in 2018 a number of opponents in a football match were picked up for rough tackling the president .It was also during his tenure that Burundi qualified for her first African Cup of Nations in Egypt 2019. 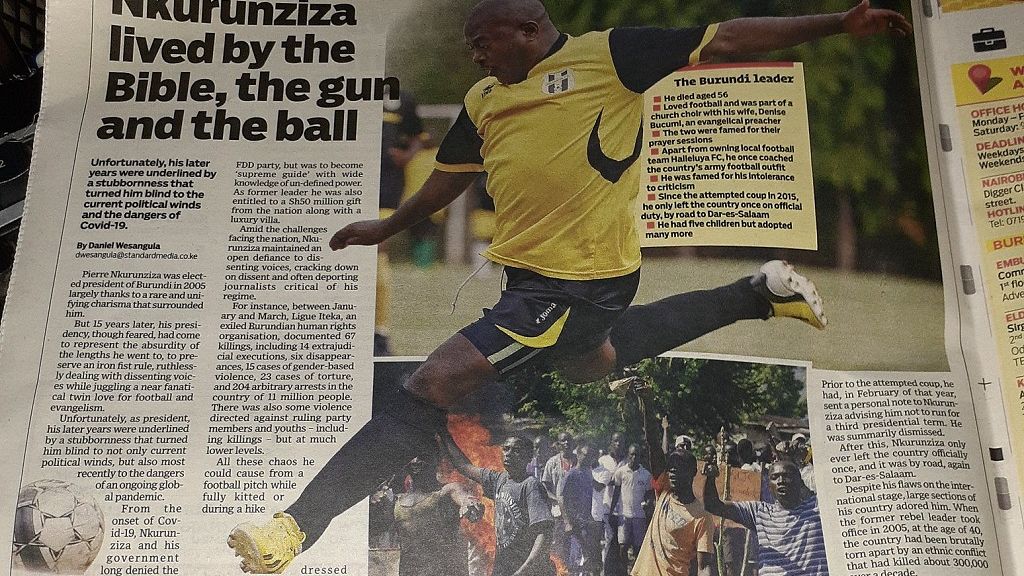 Football, Pierre’s passion, actually sought to intervene in the post-2015 political crisis after it emerged in 2016 that the then FIFA president Sepp Blatter had offered Nkurunziza a top post in exchange for quitting the presidency.

A president who loved his bike

To the cycling tracks, Nkurunziza undoubtedly loved his bicycle. It was often his preferred mode of transport when he was going to cast his ballots – during 2010 vote, the 2018 referendum and in the last elections.

He was also a patron of the Tour de Burundi event during which he usually pedaled off the competition – a typical case in point being in 2018. But beyond the voting booth, he is on record to have cycled to his farm and to other events – of course under heavy security.

In 2017, photos were shared on social media showing the president out cycling with an armed convoy driving behind him. Wearing his helmet, Nkurunziza was pictured on what seemed to be a major road with some residents watching him from the sides of the road.

One can think of a few other African leaders being as sporty as Pierre. In the region, Ugandan president Yoweri Museveni often rides his bike to farm and recently shared keep fitness tips for citizens under lockdown.

South African president Cyril Ramaphosa often goes for walks, Ethiopian Prime Minister Abiy Ahmed in 2018 engaged rioting soldiers in a press-up contest, Tanzania’s John Magufuli, five years ago, did press ups on the campaign trail; we wait to see if re-election will push him to offer a new round.

The government statement announcing his death confirmed that he watched a game of volleyball on Saturday, June 6 – pictures were shared by national broadcaster – but fell ill that night and was taken to hospital in Karuzi in central Burundi.

His health improved on Sunday but “surprisingly, on morning of Monday June 8, 2020, his health suddenly deteriorated and he had a heart attack.” Doctors provided “cardiopulmonary resuscitation” for hours but were unable to save him.

His last cabinet meeting was on May 27, his last tweet was a day before. A message posted in French congratulating Evariste Ndayishimiye, the president-elect who was due to take over from him in August. A week of national mourning is underway, cabinet is seeking judicial interpretation on who leads the transition but for ordinary citizens it is time to look into the post-Nkurunziza era.

One thing is sure, that Pierre for all the zigzag that characterized his 15-years in charge was one of, if not Africa’s most sporty leader by a mile. If fitness was a measure of how long a leader stayed, Pierre would outlive a sizeable number of those still in charge.