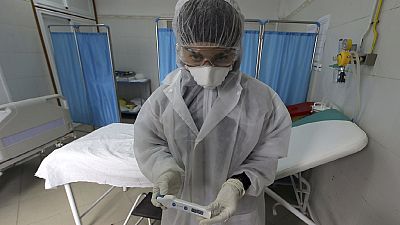 In Algeria, government has announced that rapid test kits are being produced, junior minister in charge of pharmaceutical production Lotfi Benbahmed said on state television.

A laboratory in the capital Algiers produces the kits which can return results in fifteen minutes. The outfit has a production capacity of 200,000 units per week, the government said on Monday.

The production company is operating with support from two foreign firms – one Jordanian and the other, Canadian.

Algeria is one of Africa’s most impacted nations. As of May 13 10:30 GMT, the country had 6,067 cases with 515 deaths and 2,998 recoveries, according to the john Hopkins University tallies.

The Algerian health minister announced on February 25 that the North African nation’s first case of the virus, was an Italian who arrived on Feb. 17.

The country has allocated $100 million to import medical equipment and pharmaceutical products to counter the virus. It has also benefited from medical donations from China recently.

There is a nationwide curfew in place as well as the closure of most businesses and schools. Public transport has also been suspended as part of efforts to contain spread of the virus.

Most African countries according to experts are lagging behind in the area of testing for the virus, a situation that could largely account for the relatively lower cases compared to other regions.

Africa’s biggest tester so far is South Africa with over 300,000 tests which has returned over 11,000 confirmed cases. Countries aside purchasing these kits also benefited from deployments by the WHO Africa office, the AU’s African Centers for Disease control and donations among others from the Jack Ma Foundation.