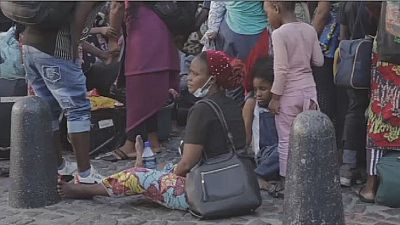 Police in South Africa on Thursday forced the evacuation of hundreds of foreign migrants who had been sheltering in a church premise for months.

Wearing riot gear, the police officers broke down the front door of the church and forced their way.

The migrants refused to leave the church, demanding that the government relocates them.

“People here at the church were still concerned about their own issues and where not entirely happy but there is nothing we can do, we have to make sure everybody is safe and everyone is healthy and obviously they are going to a place which may not be the best but certainly is in their best interests that they moved out the church and be placed in Belville (a suburb 30 km (19 mi) away’‘, Chris Nissen, Part-Time Commissioner of the South African Human Rights Commission said.

The operation at the Central Methodist Church was aimed at ending a long standoff between the group of foreign nationals and city authorities.

South Africa is in the midst of a 21-day lockdown due to coronavirus pandemic; hence the migrants will have to remain at the temporary camp for at least the remaining two weeks of the lockdown.

Last month, police undertook a similar operation to remove migrants who had been camping in the square outside the church.