The Chairperson of the African Union Commission, Mr Moussa Faki Mahamat, and the Director of the Africa Centres of Disease Control and Prevention (CDC), Dr John Nkengasong, also participated in the teleconference.

In his opening remarks, President Ramaphosa emphasised that a continental coordinated response was more important than ever before in order to arrest the rapid spread of the COVID-19 pandemic. He noted that the development and spread of the COVID-19 has stretched public health systems beyond limits and caused an enormous global economic, social and humanitarian meltdown.

President Ramaphosa underscored the fact that poverty, poor sanitation, an existing disease burden, overstretched health systems and extreme urban population density mean that the pandemic could explode in an even more catastrophic way than has been seen thus far in Africa. Hence the need for urgent action in order to stem the tide. President Ramaphosa emphasised that the AU, Regional Economic Communities (RECs) and all health institutions should direct their efforts at stopping the spread of the virus.

The Bureau received a briefing from Dr John Nkengasong, the Director of the Africa Centres of Disease Control and Prevention (CDC), who stated that the rapid spread of the COVID-19 is an unprecedented public health disaster. Dr. Nkengasong stated that the coronavirus has been spreading rapidly across the world, affecting 175 countries, with 470 000 confirmed cases and claiming more than 21,000 lives. He noted that 46 African countries have reported a combined total of 2,746 infections, 72 deaths, and 210 recoveries. He warned that the pandemic could explode in poor countries in an even more catastrophic way than has been seen elsewhere thus far.

The Bureau expressed grave concern about the rising local infections, in the context densely populated human settlements on the African continent.

Consequently, the Bureau underscored the importance of coordination across the continent and the necessity to exchange credible and real time information about the spread of the virus. The Bureau agreed to establish a continental anti-COVID-19 Fund to which member states of the Bureau agreed to immediately contribute US $12, 5 million as seed funding. African Union Member States, the international community and philanthropic entities are urged to contribute to this fund.

The Bureau noted the critical role of the CDC, and its under-funding. In this regard Member States of the Bureau agreed to contribute an amount of $4.5 million towards boosting the capacity of the CDC.

The Bureau expressed concern about the possible shortages of medicines and vaccines as factories close or countries retain supplies for their own consumption. In this regard, the Bureau underscored the vital importance of coordinating efforts to increase global production and improve the availability of medical products and equipment.

Given the limited health infrastructure in Africa and the reality that most of the pharmaceuticals and medical supplies consumed on the continent are imported, the Bureau called on the international community to encourage open trade corridors, especially for pharmaceuticals and other health supplies.

Additionally, the Bureau urged G20 countries to provide an effective economic stimulus package that includes relief and deferred payments. In this regard, the Bureau called for the waiver of all interest payments on bilateral and multilateral debt, and the possible extension of the waiver to the medium term, in order to provide immediate fiscal space and liquidity to governments.

The Bureau also urges the World Bank, International Monetary Fund, African Development Bank and other regional institutions to use all the instruments available in their arsenal to help mitigate against the scourge and provide relief to vital sectors of African economies and communities.

The Bureau expressed support and appreciation for endeavors of the Committee of African Health Ministers and paid tribute to the courageous efforts of all medical and health care officials on the continent engaged in combatting the COVID-19 pandemic.

The Bureau urge all citizens of Africa to abide by national measures implemented to curb the spread of the COVID-19 virus.

The Member States of the Bureau of the Assembly of AU Heads of State and Government expressed their deepest appreciation to the Chairperson of the Bureau, His Excellency President Cyril Ramaphosa for his timely convening of the meeting in order to develop a coordinated African response to curb and reverse the spread of the COVID-19 virus in Africa.

The Bureau of the Assembly of AU Heads of State and Government agreed to remain seized of this matter. 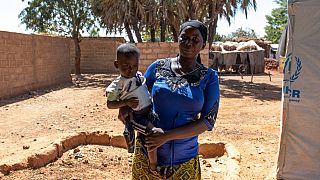