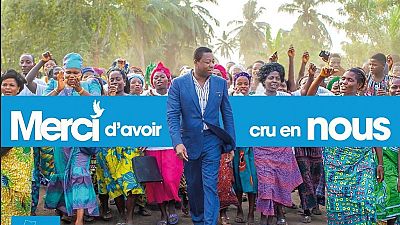 Reacting on social media after the declaration, the 57-year-old president said the court had affirmed what was a clean, fair and transparent process. He reiterated calls on opponents to join in nation building efforts.

“The proclamation of the final results of the presidential election today by the constitutional court marks the culmination of a democratic, free, inclusive and transparent electoral process.

Beyond the expression of my gratitude for the renewed confidence, I would like to tell you my admiration for the political and democratic maturity which you have massively shown.

“Beyond the expression of my gratitude for the renewed confidence, I would like to tell you my admiration for the political and democratic maturity which you have massively shown,” his post read in part.

Two days after the vote, the elections body, CENI, declared Faure winner with 72% of valid votes cast. The declaration came amidst an opposition victory claim with other aspirants congratulating a former Prime Minister for “unseating” the president.

“Based on all the data obtained from the local independent electoral commission and the independent embassy electoral commissions, the candidate of the Union for the Republic (UNIR) party, Mr. Gnassingbé Essozimna Faure is provisionally proclaimed elected president of the Togolese Republic”, Kodjona Kandaga, President of the National Electoral Commission said at the time.

The court declaration is the final leg of the poll process. A victory for the 53-year-old was widely expected. It extends the dynasty of the Gnassingbé family over the former French colony.

Faure has led the country of 8 million people since he took over in 2005. He rose to power following the death of his father, Gnassingbé Eyadema, who ruled the West African nation for 38 years.