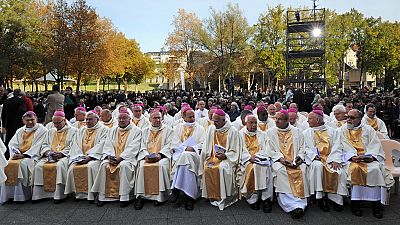 Cameroon’s international partners including France and the United Nations have condemned last week’s killing of 23 villagers in a troubled English-speaking region.

The incident on Friday took place in a region where armed separatists are campaigning for independence from the rest of Cameroon, which is majority French-speaking.

More than 3,000 people have died and at least 700,000 have fled their homes in the nearly 29-month-old conflict. Rights watchdogs say they have documented killings of civilians and other abuses by the armed forces as well as by separatists.

There will be no military victory for any side.

The United Nations on Tuesday urged authorities in Cameroon to conduct an independent investigation into the “shocking” incident and ensure the perpetrators are held accountable.

Citing information from colleagues on the ground, the UN rights office said two pregnant women and 15 children, nine of them aged under five, were among those killed.

“We urge the authorities to ensure that the investigation is independent, impartial and thorough, and that those responsible are held fully to account,” the High Commissioner for Human Rights said in a statement.

The UN had previously put the toll from Friday’s attack at up to 22, but Tuesday’s statement said 23 people had died in the “shocking episode”.

Part of Cameroon’s opposition blamed the deaths on members of the armed forces, an allegation that the army on Monday blasted as “duplicitous”.

It said a woman and four children died in an “unfortunate accident” when fuel containers were set ablaze in an exchange of fire between security forces and separatists in the village of Ntumbo.

But France, a strong ally of Cameroon’s 86-year-old President Paul Biya, on Tuesday condemned “the violence”.

“We wish total light to be shed on this tragic event and for those responsible to be brought to account,” the foreign ministry’s spokesman said in Paris.

Witnesses had told the UN that around 40 armed men had attacked the village, “opening fire on people and burning down houses”, the UN rights office said.

The UN rights office said the already tense situation in Cameroon’s anglophone regions had worsened ahead of this month’s parliamentary and municipal elections.

“The government deployed some 700 additional troops in the North-West and South-West where armed separatists reportedly kidnapped dozens of candidates, most from the Social Democratic Front which is one of the country´s biggest opposition parties,” the UN said.

While most of the candidates had since been released, the UN said it had also received information that voting centres and the homes of those involved in the election campaign had been attacked by separatists.

On Monday, 16 Catholic bishops from around the world sent a letter to Biya, urging his government to talk to the separatists.

Biya, in power for 37 years, has repeatedly ruled out demands for autonomy or a return to Cameroon’s federal structure, although he has recently endorsed a decentralisation of some powers from Yaounde, the capital.

“There will be no military victory for any side,” the bishops warned.

“A lasting solution to Cameroon’s problems must come from a mediated process that includes anglophone armed-separatist groups and non-violent civil-society leaders.”

The “best path” lies in a Swiss proposal to broker talks, they said.

English-speakers account for nearly a fifth of Cameroon’s population of 24 million — a legacy of the French and British decolonisation of West Africa in the late 1950s.

Most anglophones live in the Northwest Region, where Ntumbo is located, and the adjoining Southwest Region.

Years of grievances at perceived discrimination snowballed into a declaration of independence in October 2017 and a government crackdown.

“We call on the government to ensure that the security forces abide by applicable international law norms standards during the conduct of their operations,” Tuesday’s UN statement said.

“We similarly remind armed separatist groups of their responsibilities under international law and call on all parties to refrain from deliberate attacks on civilians.”