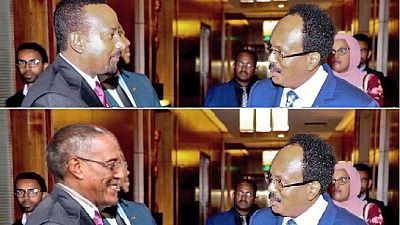 Somali presidential spokesman Abdinur Mohamed on Wednesday confirmed via Twitter, a widely reported meeting in the Ethiopian capital, Addis Ababa, between leaders of Somalia and Somaliland.

According to his statement, the Tuesday February 11 meeting between Somalia’s Mohamed Abdullahi Farmaajo and Muse Bihi of Somaliland was brokered by Ethiopian Prime Minister Abiy Ahmed.

“It was behind closed doors and no communique is being released. It was an ice-breaking one,” the spokesman said. The PM’s office has not commented publicly on the talks, which occurred on the sidelines of an African Union gathering.

It was behind closed doors and no communique is being released. It was an ice-breaking one.

The Somali leader joined his counterparts at the AU summit that took place over much of last weekend ending on Monday. The Somaliland leader arrived in Addis Ababa on February 9th, a day after Farmaajo flew in.

The meeting which has had no details except for the confirmation was however hit with a fake photo that purported to show the two leaders in a handshake.

It received traction after it was posted on Twitter by Rashid Abdi, a Horn of Africa, Gulf security analyst and researcher. He titled the picture: “A pic that has planted joy and hope in me. May Allah lead Somalia and Somaliland to peace, reconciliation and full accord.”

Adding in another tweet: “I strongly believe reconciliation, peaceful settlement between Somalia and Somaliland big boost to peace, stability in the horn. Both Farmajo and Bihi have all to gain from working towards this goal. Good luck.”

It wasn’t long before it was pointed out that the picture was actually photoshopped. A Google reverse search showed that the original photo was of Abiy meeting with Farmaajo in Beijing on the sidelines of the 2018 FOCAC summit.

Meanwhile, the Somaliland Standard news portal reports that Hargeisa also confirmed the meeting via Foreign Minister. The Minister said a delegation headed up by President Musa Bihi Abdi was in Ethiopia to seek recognition within the African Union.

Somaliland broke away from Somalia in 1991 as the country collapsed into warlord-led conflict, and it has seen little of the violence and extremist attacks that plague Somalia to the south. Despite lacking international recognition, Somaliland has maintained its own independent government, currency and security system.

Somalia considers Somaliland as part of its territory. Several rounds of past talks over possible unification have failed to reach a breakthrough.

Somali officials have blamed Somaliland leaders over the failure of past talks, accusing them of failing to show seriousness. Somaliland leaders have dismissed the allegations and insisted that their sovereignty is nonnegotiable.

Since taking office in 2018, Ethiopia’s leader has worked to achieve a number of diplomatic breakthroughs in the long-turbulent Horn of Africa region.

Somalia’s president faces a number of challenges in the months ahead. The country hopes to achieve its first one-person-one-vote election by the end of this year.

It would be the first in 50 years. But the United Nations envoy for Somalia has pointed out the lack of “effective cooperation” between Somalia’s central government and its states as a major obstacle. 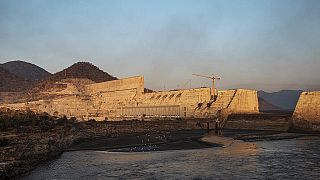