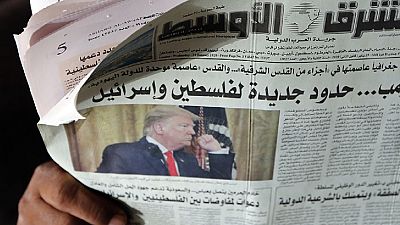 On Tuesday, United States president Donald Trump outdoored what he said was a “Peace to Prosperity” plan for the protracted Israeli – Palestinian issue.

Reactions to the plan came in thick and fast from countries, diplomats, political and security watchers as well as people on social media platforms – Twitter and Facebook.

One word that was widely associated with the plan was “apartheid,” drawing parallels between the white-minority system that was deployed in South Africa till Mandela and others fought and brought the system down.

Apartheid is simply a social policy or racial segregation involving political and economic and legal discrimination against people who are not whites. It was a formal policy in South Africa till 1994. it is believed to have started in 1948.

According to the White House: “This Vision is the most realistic solution to a problem that has plagued the region for far too long.

“It creates a path to prosperity, security, and dignity for all involved. If the parties can agree on this framework as a basis for negotiations, the potential for both the Israelis and the Palestinians and the region is unlimited.”

The 181-page document details conceptual maps of a Future Palestine State and the State of Israel. Palestinians have unreservedly rejected the plan as has Iran whose Foreign Minister said the plan was “sleepwalking into a catastrophe’

“Could Mandela ever have imagined re-emergence of BANTUSTANS, decades after liberation of South Africa? “Vision for Peace” looks more like “Highway to Hell”.

“We Muslims need to wake up: The U.S. never was—and can never be—anything resembling an honest broker,” his follow-up tweet read.

Could Mandela ever have imagined re-emergence of BANTUSTANS, decades after liberation of South Africa?

“Vision for Peace” looks more like “Highway to Hell”.

We Muslims need to wake up: The U.S. never was—and can never be—anything resembling an honest broker.#Unite4Palestine pic.twitter.com/yVh8rLjYwE

30 years after the fall of South African apartheid, Trump and Netanyahu are imposing their own #apartheidplan on Palestinians, complete with segregated Jewish-only settlements built on stolen Palestinian land. pic.twitter.com/OhoTAQykgO

But we will never surrender our rights and our land.

Inspired by the movement that helped end apartheid in South Africa, we call for international pressure through #BDS. pic.twitter.com/vhyYycIt3P

Hi. Jew here. Israeli Jew. Trump and Netanyahu's “vision of peace” is a vision of permanent apartheid. Every Jew in the world who claims to care about democracy, human rights, and racism should be outraged that this atrocity is perpetuated in their name. Free Palestine.

I just went through the Trump“Peace plan.” Sick joke. Palestinians are being offered no state at all, just the box a state came in. Israel will be left in complete control of the entire area from the river to the sea. Pure apartheid. Makes massive future conflicts inevitable.

Want to understand why Trump’s Middle East plan is racist & enshrines apartheid in the holy land? Try replacing the words “Israel” with “White people” & the word “Palestine/Palestinian” with Black people & then re-read the plan. Here are some examples: #DealOfTheCentury (thread)

What’s happening to Palestine and Palestinians right now is Apartheid. Trump and Netanyahu are handshaking on the formalisation and expansion of that Apartheid.
And if you’re equivocating about that, or denying it, you’re facilitating it.
That’s your place in history. pic.twitter.com/S3J1ldh9wA 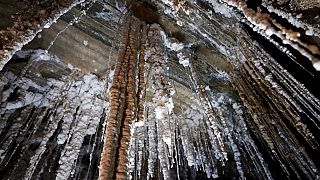 A salt cave in Israel could be the world's longest

A salt cave in Israel could be the world's longest