Coronavirus - Africa: WHO calls for equitable access to future COVID-19 vaccines in Africa 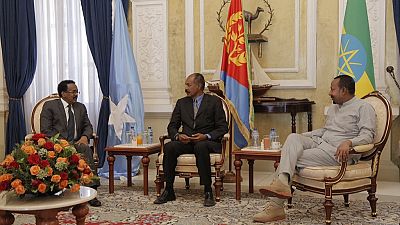 Eritrea’s president Isaias Afwerki, Somalia’s Mohamed Abdullahi Farmaajo and Ethiopian Prime Minister Abiy Ahmed Ali have agreed a joint plan of action for this year after the third edition of a tripartite summit in Asmara.

The three leaders met for discussions on Monday in what the Eritrean information ministry said were “candid and extensive discussions on the situations in their respective countries.”

The statement by the ministry said the three nations reaffirmed their commitment to the September 2018 deal signed in Asmara with a view to consolidating it and expanding it across the Horn of Africa.

The statement expatiated further: “On the security front, the three leaders formulated a comprehensive plan to combat and neutralize the common threats they face, including terrorism, arms and human trafficking and drugs smuggling.

“Regarding economic and social development, they agreed to prioritize the mobilization of their bountiful human and natural resources; build, modernize and interface their infrastructure and develop their productive and service sectors.

“They also expressed their appreciation for, and their readiness to cooperate with, their friends and partners, on the basis of mutual respect and mutual benefit.

“The three leaders agreed to closely consult with their Brothers, Heads of State, for the realization of the aspiration of their peoples for effective Horn of Africa,” it concluded.

Our aspirations for prosperous and stable Horn of Africa region continues in Asmara as we meet again to discuss propelling development in the region. Glad to join fellow leaders of the Horn; Our host H.E President Isaias Afwerki and H.E PM Abiy Ahmed. pic.twitter.com/MUqANOxW2i