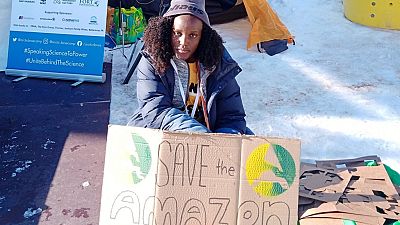 Vanessa Nakate took to social media to hit out at AP over what she said was a racist decision by the agency. According to her, AP had actually eliminated an entire continent by their action. She was in Davos on the invitation of the WWF Arctic Base camp program.

The photo at the heart of the issue is of a number of climate activists at the World Economic Forum, WEF, in Davos, Switzerland. The photo had now famous Greta Thunberg posing with four other activists.

Greta was in the middle of the five-member photo flanked on each side by two fellow activists. Nakate was positioned at the far left of the photo.

She posted a video on Twitter titled: ‘What it means to be removed from a photo!’ sharing her experiences in Davos and expressing her reservation over the photo episode. She subsequently posted more tweets on the impropriety of AP’s actions.

Share if you can
What it means to be removed from a photo! https://t.co/1dmcbyneYV

Her story has been reported widely by the international press with most people slamming the AP via social media. Twenty-four hours after she posted her first video, solidarity messages continue to be shared.

The head of UNAIDS, Winnie Byanyima, was among those that expressed pride in Nakate’s protest whiles encouraging her to fight on.

We regret publishing a photo this morning that cropped out Ugandan climate activist Vanessa Nakate, the only person of color in the photo.

As a news organization, we care deeply about accurately representing the world that we cover. We train our journalists to be sensitive to issues of inclusion and omission. We have spoken internally with our journalists and we will learn from this error in judgment.

I am a climate activist from Uganda

I am so proud to be an African

I am not going to be silenced

I am going to speak louder

Now is the time to rise up higher than before

We can do this together pic.twitter.com/SnF2gK16BV

Disappointed but not surprised- Associated Press cropped out Ugandan climate activist Vanessa Nakate from a photo taken of her in Geneva with activists Luisa Neubauer, Greta Thunberg, Isabelle Axelsson, and Loukina Tille (who are all white) https://t.co/x9Bc6CKzzt

The voices of Africa’s #Young Women and Men Matter.

Do not crop them out.

Do not exclude them.

The ugly cancer of #Racism is slowly eating up western media,if u look very carefully in the photos below you will see where AP cropped out a black climate activist vanessa_vash from Uganda.After complaining ,they later changed the original photo.Shame!? pic.twitter.com/3AlCxsR4VH

Wow ?, because you can’t be black and care about climate change apparently?! This is unacceptable on so many levels, sorry this happened to you Vanessa! Shame on you AP! Her name is #VanessaNakate she is 23 from Uganda and she is fighting climate change. https://t.co/Ivk4PsjlgM