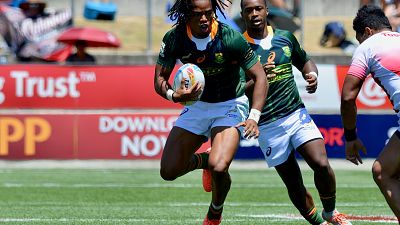 The Springbok Sevens team crucially lost 21-19 to England at the HSBC New Zealand Sevens on Saturday and pending the final Pool B matches on Sunday, could miss out of the semi-finals at FMG Stadium Waikato in Hamilton.

The Blitzboks, who earlier beat Japan 31-5 in their opening game, now must bank on the Japanese to topple England and then beat Kenya in their final pool match on Sunday in order to advance to the top four as the tournament is played in a new format where only pool winners advance to the semi-finals.

Neil Powell was frank in his assessment of the close defeat, which saw England coming back from 14-0 down to take a 21-14 lead with two minutes to play. A late Justin Geduld try gave the Blitzboks a chance, but Geduld pulled his conversion wide, which left the South Africans short.

“We were not good enough, especially in the second part of the game. We had some control in the first five minutes, but after that we dropped our standards,” said Powell.

“We made basic mistakes and a lot of them. We lost to ourselves as much as to England out there. We only have ourselves to blame for giving away the momentum and control and not being able to get it back again.”

The Blitzboks started well, with tries by Stedman Gans and JC Pretorius putting them in the lead. Gans ran a strong line from a scrum and Pretorius sold the England defence a delightful dummy to add to the score.

The English came back with a long-range try by the speedy Dan Norton just before the break after a defensive lapse by the Blitzboks.

“That was bad yes, we cannot allow our opponents to score tries like that, said Powell.

“We need to go back and have a hard look at ourselves on why that happened. It is not on if they run right through us from a lineout.”

The second half saw more dominance from the England side. They scored shortly after the restart to draw level and then got their third with two minutes to play. Geduld turned hero and villain and time ran out for the Blitzboks.

Against Japan, the Blitzboks took a while to get going. Muller du Plessis scored the only try of the first half, but Pretorius and Cecil Afrika edged them further ahead before Angelo Davids confirmed the result with two late tries.

Powell said the Blitzboks now face the reality of the format: “We can't complain. It will be the same at the Olympics later this year. We knew what the format was, so we only have ourselves to blame.”

He was expecting a tough match against Kenya early on Sunday morning (SA time). The East African side lost to England and drew with Japan on Saturday.

“We still have a slight change yes, but if not, there is still a lot to play for,” said Powell.

“Kenya is always a tough one, they make it an African derby and come hard at us. It is going to be a physical match, no doubt, so we need to pitch up tomorrow if we want to get the results.”

The match against Kenya starts at 01h13 (SA time) on Sunday morning.

Note to Editors:
Audio notes of Neil Powell (Afrikaans and English) can be downloaded here (http://bit.ly/2RnUf14).