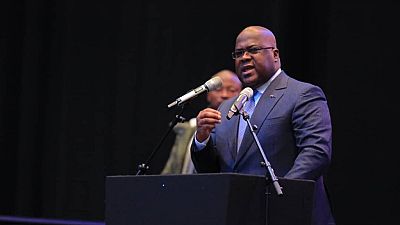 Democratic Republic of Congo’s president Felix Tshisekedi marks one year in office on Friday, and while the country’s first peaceful transfer of power was historic, the journey thereafter has been bumpy.

On January 24 2019, after election results that rivals bitterly contested, opposition leader Felix Tshisekedi succeeded President Joseph Kabila, who stepped down after 18 iron-fisted years at the helm.

To relief in the DRC and beyond, the handover defused fears that sub-Saharan Africa’s biggest country would plunge once more into civil strife.

But Tshisekedi’s promises of fast-track change, with radical reforms to ease poverty and tackle corruption, have also dimmed.

Among Congolese, Tshisekedi’s move to end fees for primary education has earned high marks for some, but others voice frustration at the endless talk about a better life.

“With the president, you always hear words, messages, promises, addresses to the nation, but the promises never become reality,” said a Kinshasa citizen, Jean-Yves, giving only his first name.

In a vast, mineral-rich country the size of continental western Europe, two-thirds of the 80 million people live in poverty.

Kabila remains a powerful figure in the background, with allies in the military and political supporters who wield a majority in the legislature.

Creating a coalition took nine months of talks, leading to a sprawling government of 67 members, two-thirds dominated by Kabila allies.

The arduously-created hybrid remains a seething source of tension.

No longer at ease

Tshisekedi on Sunday even publicly aired the possibility of “firing” ministers, a warning aimed at the pro-Kabila Common Front for the Congo (FCC) party, or even dissolving the National Assembly to resolve persistent gridlock.

The latter idea was bluntly rejected by one of his own allies, Jeanine Mabunda, the legislature’s speaker, who warned “any person who is ignorant of our basic law can be prosecuted for high treason for deliberate violation of the constitution.”

The National Assembly, elected on the same day as the presidential elections of December 30 2018, is mandated to stay in office until 2023.

Dissolving it would have the impact of an “atomic bomb,” warned Richard Moncrieff of the International Crisis Group (ICG) think tank.

“Tshisekedi has made threats, but his Plan A is to continue the coalition with Kabila.”

Facing frustrations in domestic politics, Tshisekedi has devoted much of his energies to easing the DRC’s long isolation abroad, making trips to the United States, France and the former colonial power Belgium.

He has notably improved relations with neighbouring Rwanda and Uganda in the hope of bringing peace to the DRC’s violence-torn east, where armed groups dating from the Congo Wars of the 1990s hold sway.

But he cautioned against inviting foreign armed forces into the country to help fight the militias.

“He has under-estimated the hostility of people living in the east towards neighbouring countries,” he said.

Hundreds of people have been killed in the eastern region of Beni by the Allied Democratic Forces (ADF), a ruthless militia of Ugandan origin, placing a stark spotlight on Tshisekedi’s vow to wipe out armed groups.