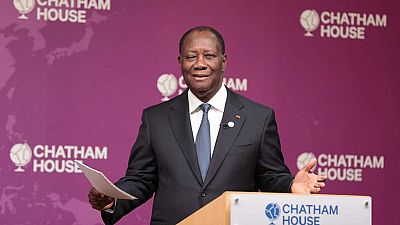 Ivorian president Alassane Ouattara says he is ready to ensure that peaceful polls are held in the West African nation later on this year.

The president was speaking at event organized by Chatham House in London. Ouattara was in town for the maiden United Kingdom – Africa summit which was held on Monday, days to the UK’s exit from the European Union.

The session was under the theme: “Elections in Côte d’Ivoire in 2020: ensuring stability and inclusion,” as part of his presentation, the president presented the Ivorian model of economic development from 2012 to 2019.

I want to reassure the audience about the political stability and control of the security situation in Côte d'Ivoire, and to reiterate my commitment to work for the organization of peaceful, free, transparent and democratic elections.

“I want to reassure the audience about the political stability and control of the security situation in Côte d’Ivoire, and to reiterate my commitment to work for the organization of peaceful, free, transparent and democratic elections,” he said.

The president was however mute on whether or not he will be a candidate in the next elections. Ouattara had earlier this year said he would propose “modifications to the country’s constitution,”:https://www.africanews.com/2020/01/07/ivorian-president-wants-to-amend-constitution/ even as he rubbished claims by the opposition that he plans to sideline opponents from this year’s presidential elections.

In ceremonies to mark the New Year, Ouattara said, “In the first quarter of the year, I will put to parliament proposals for modifications to the constitution.”

The aim is to make the constitution “more coherent… to further consolidate the state of law and bring institutions closer to our fellow citizens,” he said.

He has been in office since 2010 he secured a second term in office in 2015 with elections meant to be held for his replacement. One of his main rivals, former ally and National Assembly president Guillaume Soro is currently in forced exile.

Ivory Coast, one of the world’s biggest cocoa producers experienced a brief civil war prior to Ouattara coming into office. The country has been stable for the better part of the last decade except for a mutiny by soldiers which threatened to shut down the economy, it was later resolved.