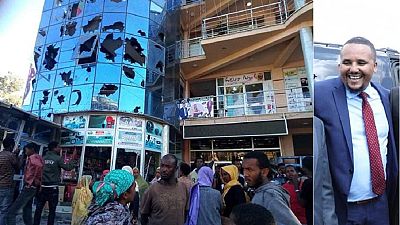 Ethiopian politician and media owner Jawar Mohammed is accusing security forces of being passive during an attack on a building complex housing his media outfit, the Oromo Media Network, OMN.

The activist turned politician shared photos of a damaged office complex he said was located in Harar, in eastern Ethiopia. He said aside OMN, offices of the party he belongs to, the Oromo Federalist Congress, OFC, were also attacked.

The photos showed smashed glass windows on the building and also damage to a vehicle parked in front of the edifice. “Buildings hosting OMN and OFC offices in Harar were attacked today. While the mob was carrying the attack, security personnel were photographed watching idly,” he wrote.

The incident was linked to a security situation that warranted federal intervention to restore order during skirmishes that arose in the celebration of the Epiphany also known as the Timket, an Orthodox celebration of the baptism of Jesus Christ.

Leader of the OFC confirmed to the OMN that their offices were attacked and property damaged. There has yet to be official word of any arrests over the incident. A stage collapse in northern city of Gonder also claimed ten lives according to AFP.

Ethiopia heads to national polls in August, according to a tentative poll date, the issue of security has been top of the agenda as Prime Minister Abiy looks to oversee a democratic process for a fresh mandate.

Celebrations were interrupted & gunshots were briefly heard when members of the fed. army intervened.