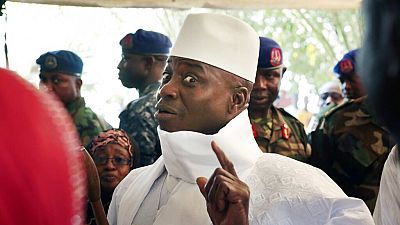 Police in The Gambia have banned a group that planned to continue anti-government protests calling for president Adama Barrow to call elections despite having two more years per his current mandate.

The group “Operation Three Years Jotna” are demanding that Barrow respects a promise to serve three years and quit as part of a transition period for the post Jammeh era.

The police administration cited complex security and safety implications for turning down their request to protest. The Interior Ministry in a statement affirmed its support for the police position.

He is a citizen. He has every right to stay in his hometown and go and answer to the law.

The statement read in part: “The Ministry would advise persons aggrieved by the decision of the Inspector General of Police pursue the matter with the Gambian law courts for redress.”

This was supposed to be the second protest by the anti-government group. Another group, pro-government “Gambia For Five Years” also held a march calling on the president to serve his full constitutional term.

Meanwhile, a local journalist is reporting that the police have given clearance for a protest by the leading opposition party, the Alliance for Patriotic Reorientation and Construction, APRC, to hold a protest for the return of exiled former leader Yahya Jammeh.

The APRC members are demanding the government, the United Nations, regional ECOWAS bloc and African Union to respect and implement the ’2016 agreement’ under which Jammeh agreed to leave for exile in Equatorial Guinea amid a tense post-election situation.

Jammeh is recently reported to have complained of being homesick and expressed the desire to return home. The APRC’s deputy spokesman released several audio recordings to the media over the weekend featuring conversations between Jammeh and a top party official.

“I am coming back. They said they drove me out of the country. Apart from Allah, nobody can take me out of The Gambia,” Jammeh is heard saying. The recordings could not be independently verified and it was not clear when they had been made.

No indictments as yet but could Jammeh be arrested if he returns?

While he has not been charged in Gambia with a crime, witnesses have testified before an ongoing Truth, Reconciliation and Reparations Commission, some saying they had carried out summary executions at his direction.

Authorities also have suggested Jammeh could face economic crimes for pillaging state coffers before he fled into exile in Equatorial Guinea in January 2017. He stole an estimated $1 billion during his rule, according to The Organized Crime and Corruption Reporting Project.

Equatorial Guinea, led by the same president for more than 40 years, is unlikely to ever extradite Jammeh. It’s unclear what measures Gambian authorities would take if Jammeh voluntarily returned home.

Do Sannoh, an adviser to Gambian President Adama Barrow, said Sunday he was unaware of any ongoing negotiations over Jammeh’s possible return. But he said the former leader would be welcome to appear before the commission that has been investigating alleged abuses during his rule.

“He is a citizen. He has every right to stay in his hometown and go and answer to the law,” he said.

The audio recordings prompted outcry from the Gambia Center for Victims of Human Rights Violations, which said the government should arrest Jammeh if he sets foot in the country.

“Former President Yahya Jammeh’s rule in The Gambia was a tyrannical and brutal dictatorship,” said Sheriff Kijera, the center’s chairman. “He is a fugitive from justice and a subject of serious allegations of human rights violations.”

Kijera added: “If former president Jammeh is authorized to return to The Gambia without being arrested, charged and prosecuted for his crimes or transferred to another state for him to face justice, it would be a big failure on the part of the government of The Gambia to uphold its duty to the people of Gambia, as well as its international obligation to provide an effective remedy to victims.”