Senegal and Liverpool forward Sadio Mane was awarded the African best player 2019 at an event in the Egyptian city of Hurghada on January 7. He became the final awardee for the decade 2010 – 2019.

He succeeds Liverpool teammate Mohamed Salah who was also shortlisted along with Manchester City’s Riyad Mahrez who led Algeria to AFCON glory in 2019. Both contenders were absent at the ceremony.

Mane received the award from the president of the Confederation of African Football, CAF, Ahmad Ahmad. On stage was the first award winner for the decade, Samuel Eto’o of Cameroon won his fourth award in 2010 when he was with Italian side Inter Milan.

Mane helped his club side win the UEFA Champions League in the 2018/2019 season and was captain of the Senegal side that lost the 2019 AFCON to Algeria in Egypt.

This was the fourth straight time that he had been shortlisted for the award. He lost in 2016 to Gabons Aubameyang (at the time with Dortmund). Then missed out to Salah twice in 2017 and 2018. Many analysts projected after the AFCON that this was his year despite the final loss.

The final African best player for the last decade (2010 – 2019) will be decided tonight in Egypt’s Hurghada at the annual Confederation of African Football (CAF) Awards.

All winners in the different categories will represent a special group, the final awardees for the decade. As usual, all eyes are on the African Footballer of the Year award.

Who won what on the night:

Relive proceedings of the event:

Senegal talisman Mane has been tagged as favourite for the award which will be his first after making the shortlist for three times in a row. Salah had won the award in the two previous years – 2018 and 2019. Mahrez on the other hand won the ward in 2016 after helping Leicester City to the Premier League title.

Talk of Mane’s victory has heightened given that he is the only candidate currently in Egypt. Teammate Salah with whom they powered Liverpool to the Champions League did not make the trip.

The other candidate, Mahrez, who won the 2018/2019 Premier League with City and also captained Algeria to the Africa Cup of Nations title in mid-year, is also not attending according to reports.

How nominees are picked, voting process

The nominees were selected by a panel of technical experts from the Confederation of African Football plus former players and media.

The coaches and captains of the 54 African national teams will now vote for the winner, to be announced on Jan. 7 at a ceremony at Hurgada in Egypt.

The award winners for each category will be announced during the CAF Awards ceremony on Tuesday, 7 January 2020, at the Albatros Citadel Sahl Hasheesh, Hurghada, Egypt.

Cameroon’s Ajara Nchout, Nigeria’s Asisat Oshoala and South Africa’s Thembi Kgatlana are the top contenders in the women’s player of the year category.

Football loving fans across the continent can vote for the Goal of the Year at the CAF website, choosing from a spectacular list that includes Amanda Mthandi’s goal for South Africa against Zimbabwe in the 2019 COSAFA Women’s Championship.

Other contenders for best goal include Mahrez’ stunning freekick against Nigeria at AFCON.

2019 African Player of the Year: winner to be announced on Tuesday 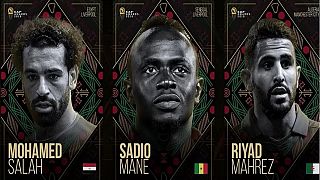 CAF Awards 2019: Here's how Africa's best footballers will be determined

2019 African Player of the Year: winner to be announced on Tuesday

CAF Awards 2019: Here's how Africa's best footballers will be determined