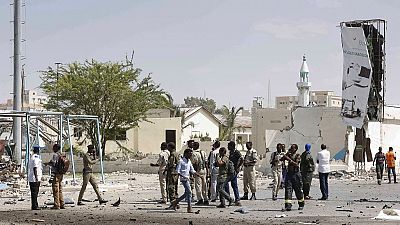 The Somali government has announced a national-level response committee to handle the aftermath of a terrorist bombing that rocked a busy junction in the capital Mogadishu on Saturday morning.

Prime Minister Ali Hassan Khaire in a message posted on Twitter said the committee will comprise of cabinet minister, governor of the city and other top officials.

He added that government will coordinate recovery of injured with local and international options. A special response center has also been put in place to help families of victims.

The enemy would be defeated and victory will ultimately be with the Somali people.

PM Khaire urged Somalis at home and outside to give maximum support in these trying times stressing that Somalia was in a state of war, one that the country was eventually going to win.

“The enemy would be defeated and victory will ultimately be with the Somali people,” he added. He said Somalis will not buckle under the threat of terrorist attacks.

The death toll from the bomb blast has been put at over 90 according to an international aid organization. The initial toll of 61 was revised to 76 to the current figure.

No group has claimed responsibility for the attacks even though the most active terrorists group in the country is the al-Qaeda affiliated Al-Shabaab insurgents.

Records indicate that per current death toll, this is the third deadliest attack in recent years. Today’s attack could beat the Oct 4, 2011 incident at Hargaha & Saamaha which claimed 100 lives. The Oct 14, 2017 truck bomb leads by a mile after 587 people were killed according to official statistics.

Punches of inspiration: Somali boxer aims to bring girls into the ring

Punches of inspiration: Somali boxer aims to bring girls into the ring