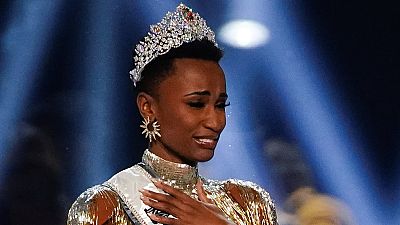 Miss South Africa, Zozibini Tunzi was over the weekend crowned Miss Universe 2019. It turns out that the crown her predecessor fitted on her head is a new one.

Jewelry designer Mouawad created a new “Power of Unity” crown reportedly worth $5 million for the 2019 edition of the competition.

The crown features 18-karat gold vines and ivy leaves inlaid with more than 1,770 diamonds. The ivy and vine are meant to represent the seven continents. It’s flanked by two smaller diamonds cut from the same stone mined from Botswana.

The 26-year-old beauty queen won the contest in Atlanta in an event hosted by Steve Harvey. She is the third South African to be crowned Miss Universe. Demi-Leigh Nel-Peters won in 2017 whiles the inaugural South African winner was Margaret Gardiner in 1978.

Tunzi is from Tsolo, South Africa and is passionate about encouraging natural beauty and crusades against gender bias.