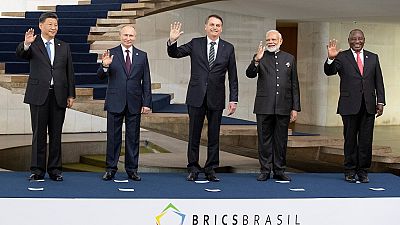 BRICS leaders have agreed to increase their investments. Brazil, Russia, India, China and South Africa, advocate for a global economy that is more open to trade and not protectionism.

At their annual summit, the heads of state expressed their willingness to fight against the reduction of trade costs, which they consider to be a handicap.

“This engagement here today is one of those essential channels through which we can find common ground on common challenges. Key countries in the global economy are currently facing slowing growth, complex challenges to their trading relationships or a turn away from the open rules-based global trading system to being much more closed and introverted”, said South African president, Cyril Ramphosa.

I hope you will seize on the opportunity and mobilise more resources from the business community and actively invest and do business in BRICS.

Within an economic context marked by rivalries in recent times, the mobilization of this platform will probably be a response to other problems that affect people’s lives, like infrastructure.

“Amongst all BRICS countries, when companies are confident then the market will be vibrant and I hope you will seize on the opportunity and mobilise more resources from the business community and actively invest and do business in BRICS countries, including in the joint implementation of large projects that have economic and social impacts and which therefore have a major impact on economic development and job creation”, Chinese president, Xi Jinping said.

The States of the BRICS alone represent nearly 42% of the world’s population.