Algerian Members of Parliament, on Tuesday, launched discussions on a controversial hydrocarbon law. The debate has stirred the fierce opposition and the regime’s protest movement. This bill, once passed into law is suspected to enable the selling of the country’s main wealth to multinationals.

It was adapted on October 14 by Cabinet Ministers and there is a vote scheduled for November 14, according to the national radio.

This bill has for long sparked protests in the capital Algiers, led by a procession of citizens and students who are generally against the old military regime.

The Energy Minister Mohamed Arkab, while addressing the nation on Tuesday, explained that this hydrocarbons law aims to “improve investment conditions in the legal, institutional and fiscal fields in order to encourage and strengthen partnership” with foreign companies.

But observers say that the law aims to relax an extremely restrictive and low-incentive legal and fiscal framework that has diverted foreign investors from Algeria, due to a decline in oil and gas production and low prices over the past 15 years. 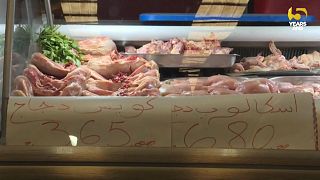 Algeria struggles to feed its people as crisis persists

Algeria struggles to feed its people as crisis persists