The massive march that Zimbabwe’s government tried to rouse for a new anti-sanctions public holiday appeared to fizzle on Friday, as just hundreds of people turned out in the capital, Harare, instead of the many thousands the ruling party had in mind.

“Today we arise and collectively say enough is enough,” Mnangagwa said. “The illegal sanctions are an albatross to the development, well-being and prosperity of the people of Zimbabwe … We call on the U.S. to immediately and conditionally remove the sanctions for the sake of our children.”

The U.S denies that sanctions against selected entities and officials, including Mnangagwa, are responsible for the southern African nation’s crisis.

Washington blames corruption, mismanagement and human rights violations instead, and it says the U.S. is the biggest provider of humanitarian assistance to Zimbabwe, whose 300% inflation is the second highest in the world after Venezuela’s.

The sanctions were imposed over alleged human rights violations amid troubled elections and the seizures of white-owned land.

Mnangagwa, who took office after longtime leader Robert Mugabe was forced out in late 2017, at first urged Zimbabweans to “stop mourning” about sanctions. The U.S. Embassy on Friday tweeted a photograph of a newspaper headline quoting his statement at the time.

President Mnangagwa said, “Our nation can no longer be held back, and our development stunted due to corruption.” Corruption is an impediment to Zimbabwe’s growth. #ItsNotSanctions pic.twitter.com/CWWafwnSUi

#FactsMatter: there are no #EU sanctions against #Zimbabwe. #EU is one of the largest donors in Zimbabwe. EU_Commission announced today a new package of 53M€ to strengthen #health and #resilience. #AUEU edmnangagwa SADC_News ZimMediaReview #ZimSanctionsMustGo pic.twitter.com/CE6NGLNAN3

Mnangagwa has since turned the sanctions into a rallying cry like his predecessor and frequently blames them for the collapsing economy as hopes fade he will revive the country’s fortunes. He says they have made it difficult for Zimbabwe to borrow on the international market and attract investors.

Marchers on Friday carried signs saying “Sanctions must go now” and “Sanctions are a crime against humanity.” Hundreds of other people, including children in school uniform, were bussed to the national stadium for festivities such as a soccer match and an all-night concert.

Many seats in the stadium were empty as most Zimbabweans chose to stay away from the event, which had been billed as a mega-festival.

But the few who attended were treated to boxes of free chicken and fries, a rare treat for many who can no longer afford to buy food for themselves and their families.

Some received cash prizes for writing songs, poems and essays articulating the impact of sanctions in Zimbabwe.

The European Union, which also came under criticism from some at the rally, said it has not imposed sanctions on Zimbabwe.

“Our restrictive measures comprise of a travel ban and asset freeze against former presidential couple, a ban for European companies to do business with Zimbabwe Defense Industries, and an arms embargo. That’s all,” the EU mission tweeted. 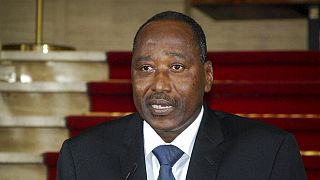 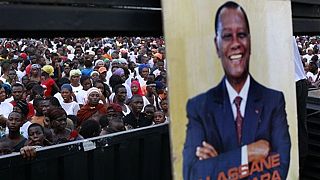