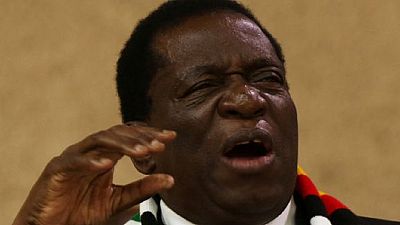 Zimbabwe has declared a new public holiday to protest U.S sanctions it says are hurting its economy — and the day comes with a state-sponsored festival.

Anti-Sanctions Day will be commemorated on Oct. 25, acting information minister Amon Murwira said Monday, calling it a chance to “further amplify the importance of this day to the economic emancipation and well-being of Zimbabwe.”

Tens of thousands of people are expected to be bused to the capital, Harare, where they will march, watch a soccer match between the country’s two biggest teams and attend an all-night concert.

Dozens of Zimbabwean officials, including President Emmerson Mnangagwa, have faced years of U.S. sanctions over alleged human rights violations amid troubled elections and the seizures of white-owned land.

“They are praying against sanctions, cultural decadence, natural disasters and all forms of abuse in the country.

“Other prayer points are Peace and reconciliation, economic revival and praying for wisdom for all leaders,” the state-run Herald newspaper said on social media platform, Twitter.

Thousands of people from over 300 denominations and government officials have gathered at the State house for a national day of prayer which is being spearheaded by First Lady Auxillia Mnangagwa. pic.twitter.com/zhTdnJV3Bg

Mnangagwa, who took office after longtime leader Robert Mugabe was forced out in late 2017, at first urged the country to “stop mourning” about the sanctions. But he has since turned them into a rallying cry like his predecessor and blamed them for the collapsing economy as hopes fade that he will revive the country’s fortunes.

The U.S. says the sanctions are not against Zimbabwe’s government at large and do not affect business between the countries. The U.S also says it is the biggest provider of humanitarian assistance to the southern African nation, whose 300% inflation is the second highest in the world after Venezuela’s.

Zimbabwe has tried to rally regional countries to speak out against the sanctions and earlier this week even held a tearful anti-sanctions prayer meeting organized by the president’s wife and attended by the president, his cabinet and dozens of others.

Some in the capital struggled to comprehend the rationale behind such events by a government that is failing to pay doctors and buy medicines, but they said they wouldn’t mind the holiday.

“We march, watch soccer, eat, drink and dance the night away … then what next?” asked Chengetedzo Mbundure, an office worker in Harare. “It is unnecessary but it is welcome. Who doesn’t love a holiday?”