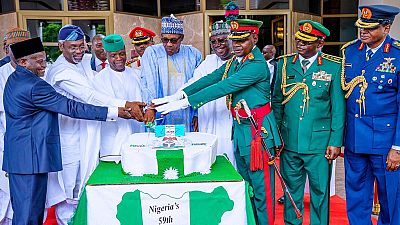 President Donald Trump’s message shared by the US State Department, he described Nigeria as one of ‘our strongest partners in Africa’.

‘‘We are allies in the global battle against terrorism, and we want to see Boko Haram and ISIS-West Africa driven out of the region and other insurgencies like them dismantled,’‘ read part of the message.

In a lengthy address to the nation, president Muhammadu Buhari reiterated his appeal for Nigerians to be law-abiding.

‘‘As I stated four years ago, change does not just happen… We must change our lawless habits, our attitude to public office and public trust… simply put, to bring about change, we must change ourselves by being law-abiding citizens,’‘ Buhari said.

He also highlighted his government’s vision for diversifying the economy, securing the population from internal and external threats.

Buhari cautioned Nigerians against misusing their freedom of expression to spread hate speech and divisive propaganda.

‘‘I reiterate my call for all to exercise restraint, tolerance and mutual respect in airing their grievances and frustrations,’‘ he added.

The path of hatred and distrust only leads to hostility and destruction. I believe that the vast majority of Nigerians would rather tread the path of peace and prosperity, as we continue to uphold and cherish our unity.

No matter how long it takes the Stammerer, a day cometh when he or she shall pronounce the Father’s name. #KeepTheFaith??#FiftyNinthAnniversary.?? pic.twitter.com/Imz6ES49RL

At 59, one undeniable fact is that we have not built the country we are capable of building. The question is: Beyond partisan politics, what do we do next? #NigeriaAt59