As tradition East Africa will dominate the number of athletes from Africa but the continent this time around will not only guarantee Kenyan victories but surprise packages from several other countries.

Added to the East African contingent, West Africa has also shipped a hand-full of top performing athletes to the competition.

South Africa as a nation named a 31 member team to take part in the championship. Their biggest star Caster Semenya will not be taking part in the games but Commonwealth 100m champion Akani Simbine will have a point to prove among the world’s best for the rainbow nation.

Nigerian’s Tobi Amusa, the 2018 Commonwealth and 2019 African 100m hurdles champion has won the support of the West African giants.

Ivory Coast’s Marie Jose Talou, who will attempt the sprint double this year after her outstanding performance winning silver in both 100m and 200m at the last edition, in London.

The World Athletics Championships is in the Middle East for the first time in history and has raised questions as to scourging local temperatures. The host has had that covered with a mind blowing cooling system implemented at the Khalifa Stadium in Doha.

Some athletes upon arriving at the facility could not hide their emotions.

In all, 2043 athletes will represent 210 countries from five continents that include 1015 male and 983 female athletes. 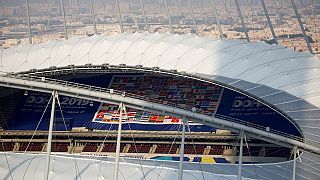