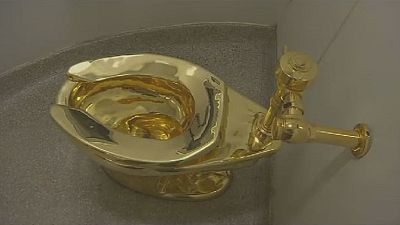 News that thieves have stolen a solid gold toilet worth some $1.25 million from the birthplace of British wartime leader Winston Churchill, has shocked many.

“I can’t believe they managed to get into the palace as well. I thought security here would be tight locked, so yeah, it’s amazing that someone’s been able to access it and be able to take it. And it’s not small, is it?”, a visitor said.

There is a thorough investigation in the process of being carried out.

“That is quite shocking. I have to admit, I’ll go back and it’ll be the highlight, we were there and the crime scene, someone stole a one million pound toilet. That’s an amazing story, I think”, another said.

“There will be an increased police presence in the local area, whilst officers and staff carry out inquiries into the circumstances. There is a thorough investigation in the process of being carried out”, Richard Nicholls, a local police official said.

The toilet was made by Italian artist Maurizio Cattelan. It had been installed just two days earlier at Blenheim Palace, West of London.

Police said the removal of the gold toilet caused “significant damage and flooding” to the building because it had been connected to the palace’s plumbing system. The building is a UNESCO World Heritage site filled with valuable art and furniture.

A 66-year-old man was arrested, but has not been identified or charged.

Blenheim Palace said the building was expected to reopen Sunday.