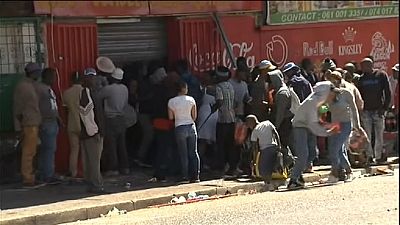 Nigeria has warned South Africa over the implication of recent xenophobic violence saying its image and standing in Africa was currently at risk.

Buhari on Monday said he had received a report from an envoy he sent to South Africa last week. He also reiterated government’s resolve to protect the interests of all Nigerians living abroad.

The implications of the situation in South Africa are really profound. They have affected us in other countries in which we operate.

“The recurring issue of xenophobia and attacks on African nationals remains very worrying. If nothing is done to stop it, it could negatively affect the image and standing of South Africa as one of the leading countries in Africa. It has to be stopped,” he said.

Buhari also announced that government had officially joined efforts of voluntary repatriation for Nigerians living in South Africa. The BBC reported that about 600 such people were scheduled to return home.

A local airline, Air Peace, had made the voluntary repatriation offer last week but postponed the move after it was discovered that most of the beneficiaries did not have proper documentation.

Let me also say that we have made arrangements for the immediate voluntary evacuation of all Nigerians in South Africa who are willing to return home. I have directed the relevant agencies to ensure this is done speedily and efficiently.

I have received the report from the Special Envoy I sent to South Africa last week. We will continue to put pressure on the South African Government to take concrete and visible measures to stop violence against citizens of other African nations.

Two people have been killed in Johannesburg, police confirmed Monday, bringing to 12 the number of deaths since violence against foreign-owned shops run by Africans erupted last month.

Bands of South Africans launched violent attacks against foreign-owned shops and stalls, looting and burning the small businesses and attacking some of the shopkeepers.

Police spokesman Kay Makhubela confirmed that two people suspected to be foreigners were killed in the violence Sunday night and said that at least 640 people have been arrested since the violence erupted last week.

The nationalities of those killed have not been announced but Nigerians, Ethiopians, Congolese and Zimbabweans have been attacked, according to local media.

The attacks appear to be spreading throughout Gauteng, the country’s most populous province encompassing the cities of Johannesburg and Pretoria.

Police minister Bheki Cele on Monday met with executives of major South African businesses, including the retailer Shoprite and MTN, a mobile phone and internet provider, whose operations were targeted in retaliatory attacks in Lagos, Nigeria, last week.

The executives expressed concern that the violence in South Africa is hurting their operations in other parts of the continent.

“The implications of the situation in South Africa are really profound. They have affected us in other countries in which we operate,” said MTN group CEO Rob Shuter. The MTN group is owned almost 50% by international investors, some living in London, Boston and New York, he said.

The Nigerian demonstrations forced South Africa’s consular offices in Lagos to close. South Africa’s foreign affairs minister Naledi Pandor is scheduled to meet with African ambassadors in Pretoria Monday as the government attempts to put out the diplomatic fallout from the attacks.

Nigerian president Mahummadu Buhari is scheduled to visit South Africa on a state visit in October, and the attacks against Nigerian nationals and businesses in South Africa are expected to be on the agenda.