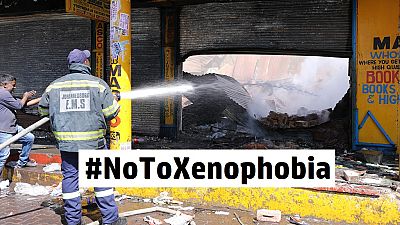 A number of influential Africans have taken to social media to voice their condemnation of the resurgent xenophobic violence in South Africa.

From a revered former South African Archbishop to a former president of Ghana, Africa’s richest man and politicians in Nigeria and South Africa, Twitter has been the preferred platform where views have been shared.

Africa’s richest man Aliko Dangote on Wednesday tweeted a message that underlined the importance of peace and unity to Africa’s development.

“Our aspirations for a shared and sustainable prosperity can only be achieved when we live in peace and unity, shunning hate and any form of violent attack on African brotherhood.

“It is time for Africans to put Africa at the center of its own development, by harnessing our entrepreneurial and intellectual skills. Let us collectively shun hate and reprisal attacks.”

For his part, Nigerian entrepreneur and businessman Tony Elumelu said poverty more than anything was the biggest threat to Africa. Another entrepreneur Femi Otedola also waded in.

“We need to stop attacking each other but rather embrace one another and work together to uplift our continent and be our brother’s and sister’s protectors wherever we may find ourselves. This is the only way to our economic liberation and prosperity.

“I am disheartened by the videos and stories floating around social media around these xenophobic attacks! They are despicable and pure madness!” Elumelu’s message read in part.

My heart cries for my Nigerian brothers and sisters who have been senselessly killed in South Africa. I strongly condemn this hateful discrimination and xenophobia. I pray for us to come together as a continent to fight this injustice …F.Ote?

Clearly, and as I have said in the past, the perpetrators of these gruesome attacks are ignorant of the continental solidarity that was required to defeat apartheid and give birth to the new South African nation.

The president of Ghana came out and strongly condemned Xenophobia in the strongest terms. When will the President of Nigeria summon up the courage to be able to do such? pic.twitter.com/G7VeYYoIQM

Foundation of Archbishop Desmond Tutu issued a statement on Wednesday stressing that incidents of xenophobia and gender-based violence were a sign that South Africa was losing its soul.

Aside Tutu, leader of opposition Economic Freedom Fighters, EFF; Julius Malema and South Africa’s ambassador to Denmark have all condemned the violence and called for restraint and justice.

A former head of anti-corruption outfit, Thuli Madonsela, also describe the events of the last few days as unSouth African and tasked nationals to reclaim the nation’s spirit of Ubuntu – a term for “humanity.” One of the country’s biggest cartoonists, Zapiro; have also reacted to the issue.

South Africa, let’s reclaim our Ubuntu. Let’s roll back the tide of violence against women, children, foreign shop owners and others. This is not us. It’s unSouth African #Ubuntu #EndViolence

I miss Mama too especially during heartbreaking times like these when we turn on our own. How she would be on the grounds before the arrival of the police or MECs… I miss her#NoToXenophobia https://t.co/S1YMtNt7Y8