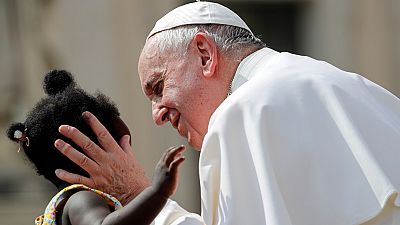 Pope Francis’ visit to the African nations of Mozambique, Madagascar and Mauritius, will feature some interesting highlights as the head of the Catholic Church continues to show solidarity with people living in difficult conditions.

The Sept. 4-10 trip will take him to the capitals of the three countries, Maputo, Antananarivo and Port Louis.

The pope recorded a video message in Portuguese for the people of Mozambique ahead of his tour.

The pope is coming to tell people to keep fighting for those who are forgotten.

The pope will regrettably not visit the city of Beira which was hit by the devastating Cyclone Idai killed at least 600 people and left hundreds of thousands homeless in March.

“I was hoping the pope would come and walk on Beira’s soil,” 45-year-old Maria da Paz told AFP, while taking comfort in the fact that some victims of the disaster would be in Maputo to meet the pontiff.

The pope, in his video message, anticipated the disappointment.

“Although I am unable to go beyond the capital, my heart reaches out to all of you, with a special place for those of you who live in difficult situations,” he said, adding: “You are all in my prayers.”

In Madagascar, the pope will celebrate mass with one of his former students, Father Pedro Opeka.

Opeka studied theology under the future pope in their native Argentina before dedicating his life to building communities for the families of Madagascar, one of the world’s poorest nations.

“The pope is coming to tell people to keep fighting for those who are forgotten,” he said.
“The pope will comfort them.”

Over the last 50 years, an organisation founded by Opeka has built homes for 25,000 people, 100 schools, six clinics and two football stadiums. Next year they will build a college for paramedics.

The 82-year-old leader of the world’s 1.3 billion Roman Catholics will also visit the presidential palace and a seminary.

“We have prepared for 800,000 people to turn out at the great mass celebrated by the pope” on the diocesan grounds of Soamandrakizay, said Gabriel Randrianantenaina, coordinator of the local episcopal conference.

Local organisers have cleared 60 hectares (150 acres) of land for the event in the north of the capital Antananarivo.

The pope will also travel in a locally-made vehicle, made by a Madagascar company called Karenjy.

“It’s with great joy that we present you the popemobile,” the apostolic nuncio, or Vatican envoy, to the island, Paolo Rocco Gualtieri, told the press ahead of the visit.

“Pope Francis will be delighted to visit Madagascar in this car.”

Pope Francis will end his tour with a brief stay in the relatively prosperous and stable Mauritius, a small island nation east of Madagascar, where the local Catholic community plans to plant 200,000 trees in his honour.

While Mauritius is around 50 percent Hindu it has a substantial Christian minority of about 30 percent, most of whom are Catholic.