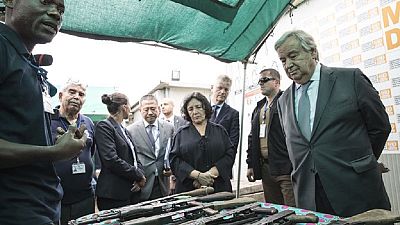 UN Secretary-General Antonio Guterres has promised that peacekeepers would continue to support the Congolese army against armed groups. Sunday he arrived in Beni in the eastern Democratic Republic of Congo.

“The United Nations Mission in Congo (Monusco) and its partners the Congolese armed forces and the national police will continue to work together to bring peace and security to the region,” said the UN chief, while officials have questioned this support out loud in recent days.

“We will do everything to put an end to the scourge of insecurity in this region,” he insisted upon his arrival in Beni.

Victimized by the Ebola epidemic, the Beni region has also been the scene of massacre of hundreds of civilians since 2014. Killings attributed by the authorities to the Ugandan militia of the Allied Democratic Forces (ADF).

The inhabitants of Beni sometimes accuse the UN force present in the region of inaction against the ADF.

“It is important that the people of Beni know that we have heard their cries of distress,” said the head of the United Nations.

The fight against insecurity will be on the agenda of his meeting Monday in Kinshasa with Congolese President Felix Tshisekedi.

On Sunday, Mr. Guterres is scheduled to visit an Ebola treatment centre in Mangina near Beni, where the outbreak started in August 2018. It has killed more than 2,000 people since then.

The United Nations maintains one of its most important missions in the DRC with 16,000 troops in the force.