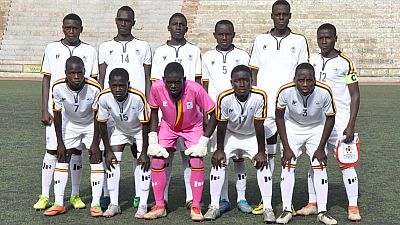 The final game at the Council for East and Central African Football Associations, CECAFA, under 15 championships, in Eritrea is underway between Kenya and Uganda.

The Ugandan side defeated Kenya by four goals at the end of proceedings in Asmara. The first strike came in the twentieth minute before a second via a free kick was registered 10 minutes later. In the second half, the Ugandan side hit two more goals to seal the title win.

The game was broadcast live on Eritrean national television, Eri-TV. Authorities also continued with the free gate policy for the fixture.

President of the African football governing body, Ahmad Ahmad was in town to grace the final according to multiple reports.

The Ugandan boys had earlier received the audience of the Vice-President Justus Mugisha who had a team talk with the team and players at the Savanna International Hotel conference room.

Semi-final fixtures at the Council for East and Central African Football Associations, CECAFA, under 15 championships, were be played on Wednesday (August 28) in the Eritrean capital Asmara.

At the end of the fixtures, Uganda and Kenya booked their places in the final slated for Friday, August 30.

The first semi-final saw Kenya edge out a spirited Rwanda side. The game ended one-all at full time but the Harambee Stars progressed 4 – 2 on penalty shootouts.

The second game turned out to be a stroll for Uganda who walloped Burundi by 6 unanswered goals.

Reports indicate that gates were opened for free into the Asmara international stadium. President of the Confederation of African Football, CAF, is expected in town to grace the Uganda vs. Kenya final.

?Uganda humble Burundi 6-0 and advance to the final of the #CECAFAU15 tournament. Uganda will face Kenya on Friday. pic.twitter.com/hryD3k8b9w

Per the calculations of Group A, Kenya and Burundi qualified for the semi finals with Kenya bagging 10 points to top the group whiles Burundi came second with 10 points by virtue of goal difference.

In Group B, Uganda topped the group with 12 points whiles Rwanda got nine points to finish second.

The four teams will return to action on Wednesday (August 28) with semi-final clashes. The final has been scheduled for August 30, 2019, in Asmara.

Hosts Eritrea stuttered on day one as they failed to win their fixture against Burundi. The East Africans prevailed 2 – 1 in the game.

The Eritrean team, however, redeemed their chances on Day 5 (August 20) beating neighbouring Sudan emphatically by 6 – 0.

Eritrea went on to lose by 2 – 1 to Kenya in a game that was billed a do or die affair. Whiles in the battle of the whipping boys, Somalia put two unanswered goals past Sudan on Day 7.

East African sides have proven superior as the fixtures enters Day 6 (August 21). Burundi, Kenya and Uganda have won their first two fixtures booking qualification for the next round. Kenya and Burundi played a one-all draw on Tuesday.

The tournament kicked off on August 16 and is expected to end on September 1. Sides that have struggled include South Sudan, Ethiopia, Somalia and Tanzania.

Even though reports indicated that Djibouti were due to participate, that did not happen and groups were reconfigured into two of five teams each.

Ethiopian lads made history with outing

Despite being the first major tournament Eritrea is hosting, history was made by the Ethiopian lads who lost their first match last Saturday against Uganda 3 – 0.

They became the first Ethiopian team to play in Asmara in over two decades – the period during which both countries were engaged in a border row. Incidentally, none of those boys were born when the war broke out in 1998.

They attained the feat after a friendly match planned for Asmara between the two senior sides failed to hold last year.

According to CECAFA General Secretary, Nicholas Musonye, the aim of the tournament is to develop talents at the grassroot level which is the basic stage in the development of a player.