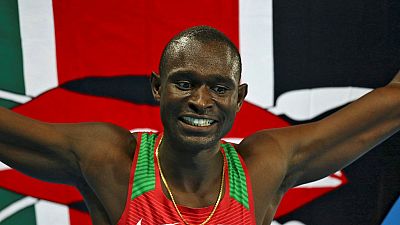 According to Keroka police boss Walter Abondo, Rudisha lost control of the vehicle and hit a bus from behind.

The athlete who was on his way to Kilgoris sustained minor and soft tissues injuries.

The passengers of the bus were, however, not injured during the incident.

Rudisha was taken to Keroka Sub County Hospital after complaining of lower limbs and chest pain, but Xray reports showed no fractures.

He was treated and discharged.

He later recorded a statement at the Keroka Police Station where his vehicle was also towed to.

Rudisha, who won Olympic gold in 2016, has not competed since 2017 IAAF Diamond League meeting in Shanghai due to recurrent back and knee injuries and he is reported to have started light training with a view to defending his Olympic title at Tokyo 2020.

He has a wild card for next month’s World Athletics Championships in Doha but he is not expected to compete in the national trials in Nairobi on 12-13 September..

Thanking the Almighty God for the gift of life.Saturday night around 1030Hrs I survived a tragic road accident at Keroka on my way home to Kilgoris after a head on collision with a bus plying Kisii Nairobi Route. I am fine with no injuries! Thank you ?? for your prayers. pic.twitter.com/RZdwemLwXG