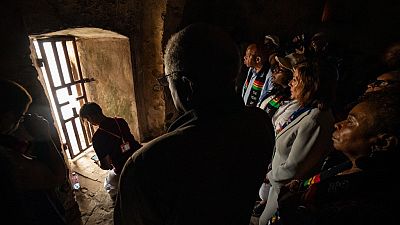 United States House Speaker Nancy Pelosi described as a transformative experience the time spent in Ghana’s coastal city of Cape Coast as part of her official visit to the West African country.

Pelosi told lawmakers in an address on Wednesday that visiting the Cape Coast Castle located in the Central Region was revealing not only for her but for the Congressional team she led to the site.

“The Cape Coast Castle we stood before the door of no return where countless millions caught their last glimpse of Africa before they were shipped to a life of enslavement.

“Being here has been a transformative experience for all of us,” Pelosi said in her address which was broadcast on state television.

Pelosi and a group of Congressmen and women arrived in Ghana on July 28 as part of efforts aimed at observing 400 years since the first enslaved Africans were shipped to America.

As part of her engagements, she met with President Akufo-Addo at the Flagstaff House – seat of government, to reaffirm commitment of both nations “to the ties that bind us.”

The trip to Cape Coast was the second major leg of her visit before her address to the parliament of Ghana.

“Today was deeply transformative. We saw the horrors of slavery & humbly walked through the “Door of Return” with a renewed sense of purpose to fight injustice & inequality everywhere,” she posted on Twitter on July 30.

Today was deeply transformative. We saw the horrors of slavery & humbly walked through the “Door of Return” w/a renewed sense of purpose to fight injustice & inequality everywhere. We honored the rich traditions of Ghana & thanked the Paramount Chiefs for our enduring friendship. pic.twitter.com/gImmwXy61v

She also reserved praise for the Ghanaian leader who had declared 2019 as the year of return for Ghanaians in the diaspora.

Ghana has in the light of the celebration signed visa waiver agreements with a number of Caribbean nations and have invited African Americans and others with their roots in Ghana to return and contribute to building the country.

Today in Ghana with the Congressional Black Caucus for the Year of Return, I had the honor to address Ghana’s Parliament with a message of respect and reaffirming the U.S commitment to security, freedom and justice for all. pic.twitter.com/Ou4VK5A8E7