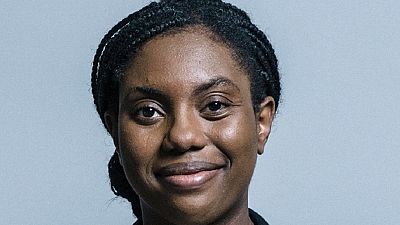 In his first cabinet since taking over the leadership of the Conservatives party and becoming the United Kingdom Prime Minister, Boris Johnson named a UK-born Nigerian as one of his junior ministers.

Among her key responsibilities is to man the Department for Education which is an outfit principally responsible for child protection, education, apprenticeships and wider skills in England.

Kemi, before her July 27 appointment, remains a sitting Member of Parliament for the Saffron Walden constituency. Many Nigerians have expressed excitement at the development congratulating her on her appointment via social media.

“Thank you for all good wishes and kind messages of support received. I also look forward to working not just with Conservatives colleagues but cross-party and grateful for the warm welcome from TracyBrabin and @SteveReedMP who no doubt will be keeping me on my toes!” she posted on Twitter.

Over in Abuja, the Nigerian government shared president Buhari’s felicitations to Kemi for her new role.

The July 31 statement said that Buhari believed that the appointment whiles well deserved will be well executed given her political experience.

“The Nigerian leader, who said he had no doubt that Badenoch would succeed given her academic qualifications and parliamentary experience, also enjoined the junior minister to see herself as an ambassador of her fatherland in conduct and performance.

“Acknowledging that Badenoch’s appointment is a plus for Nigerians in Diaspora, President Buhari said “it further confirms my belief that with hard work and integrity, Nigerians can excel in their chosen professions and fields of endeavour anywhere in the world”,” the statement read.

Sibeth Ndiaye: Dakar – Paris ????
Journey of Senegal-born French govt spokeswoman
“France has given me a lot. Today, it’s my turn to give something back,” in her words.
READ MORE: https://t.co/6ONnfxyBO7 pic.twitter.com/MqKCvw9e9G

She was born in Wimbledon into what she described as “a large and loving family.” Growing up was however shared between the US and native Nigeria.

“This international background gives me a very global perspective on life,” she is on record to have said.

She put herself through university twice having started working to support herself at age 16. First, she studied engineering at Sussex University.

Before in 2009 she gained a Law degree at the University of London as part of capacity building efforts to become a legislator “helping to make, shape and change our laws for the better.”

“I’m passionate about ensuring everyone has access to a great education. I’m a committed party activist and met my husband when I stood for parliament in 2010.

“Our family is completed by our two wonderful children, who keep us busy and entertained.

“Outside of community work, political activism, a full-time career and being a mum, the little time I have left is spent entertaining with friends and family

I’m a keen chess and poker player, an avid reader of Terry Pratchett novels and love sci-fi,” she wrote in her Facebook profile page.