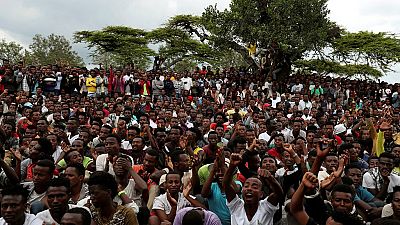 Ethiopia’s latest displacement is in the southern regional town of Yirgalem, a town that was hit by deadly unrest related to the autonomy push by the Sidama people.

The BBC quotes an official who said over 450 people were sheltering in a church having fled their homes for fear of attacks.

Sidama is located in Ethiopia’s multi-ethnic Southern Nations, Nationalities and Peoples’ region, SNNPR. The displaced are said to have fled into a district in the neighbouring Oromio Regional State.

An Oromia security official confirmed that most of the people had fled because of ethnic-based targeting. A state of emergency was imposed on SNNPR following the clashes that claimed over 20 lives.

The government has since worked to ensure the return of over a million of these persons despite calls for a cautious process especially to places where security remained volatile. Some groups accused the state of using force in the process.

The threat of large-scale violence in the regional capital Hawassa was largely averted after a Sidama opposition party agreed to delay the declaration and accept a government offer to hold a referendum in five months, not all Sidama people accepted the delay.

Ethiopia has nine ethnic-based regional states, which are overseen by the federal government in Addis Ababa but have autonomy over revenues and security forces.

The Sidama threat to declare a new region posed a direct challenge to the authority of the federal government in the Horn of Africa country of 105 million people.

The Sidama demanded a referendum a year ago on the question of a new regional state – a right enshrined by the constitution – and said they would declare their own region if the ballot was not held within the stipulated time.

The federal system in Africa’s second most populous nation is designed to allow larger ethnic groups a measure of autonomy but smaller communities such as the Sidama say they have been sidelined and some are demanding their own regions.