Trump tells Somali-born Omar, others to 'go back' and 'fix' countries they came from 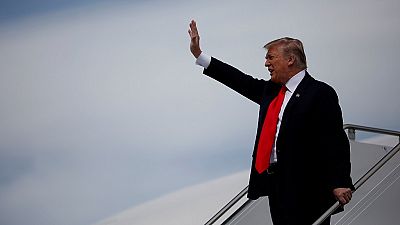 United States president Donald Trump on Sunday told Democratic Party congresswomen including Somali-born Ilhan Omar who now represents Minnesota, to ‘‘go back and help fix the totally broken and crime infested places from which they came’‘.

Omar is one of several first-year Representatives including Alexandria Ocasio-Cortez of New York, Ayanna Pressley of Massachusetts, and Rashida Tlaib of Michigan, who have been very critical of Trump.

The group known as “the squad” that has also been critical of the current Democratic leadership of the House.

“So interesting to see ‘Progressive’ Democrat Congresswomen, who originally came from countries whose governments are a complete and total catastrophe… viciously telling the people of the United States… how our government is to be run,” Trump said in a series of three comments on Twitter.

‘‘Why don’t they go back and help fix the totally broken and crime infested places from which they came.’‘

‘‘These places need your help badly, you can’t leave fast enough. I’m sure that Nancy Pelosi would be very happy to quickly work out free travel arrangements!’‘

Only Omar, whose family left Somalia as refugees and arrived in Minneapolis in 1997, was born outside the United States.

“Mr. President, the country I ‘come from,’ and the country we all swear to, is the United States,” Ocasio-Cortez, like Trump a native of New York City, responded on Twitter.

“You are angry because you can’t conceive of an America that includes us. You rely on a frightened America for your plunder.”

THIS is what racism looks like. WE are what democracy looks like. And we’re not going anywhere. Except back to DC to fight for the families you marginalize and vilify everyday. pic.twitter.com/vYzoxCgN0X

As Members of Congress, the only country we swear an oath to is the United States.

Which is why we are fighting to protect it from the worst, most corrupt and inept president we have ever seen. https://t.co/FBygHa2QTt

Yo realDonaldTrump, I am fighting corruption in OUR country. I do it every day when I hold your admin accountable as a U.S. Congresswoman. Detroit taught me how to fight for the communities you continue to degrade & attack. Keep talking, you’ll be out of the WH soon. #TickTock

House Speaker Nancy Pelosi, a California Democrat, has feuded with the group in an increasingly bitter intra-party fight, but came to their defense Sunday along with other Democratic colleagues. She called Trump’s comments “xenophobic.”

“When @realDonaldTrump tells four American Congresswomen to go back to their countries, he reaffirms his plan to ‘Make America Great Again’ has always been about making America white again,” she said on Twitter.

“Do I fit into the President’s category?” U.S. Senator Dick Durbin on Illinois, said on CBS’s “Face the Nation,” mentioning his family’s Lithuanian heritage.

“Thanks goodness,” he said of Omar’s journey from refugee to one of only two Muslim women elected to Congress, along with Tlaib, a native of Detroit. “That is what America holds as a dream. The president should not diminish it.”