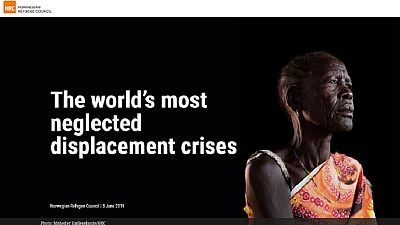 Africa contributed seven out of ten countries bedeviled by displacement crisis classed as ‘most neglected’ according to a Norwegian Refugee Council, NRC, report released on Wednesday (June 5.)

The top four countries on the list were African: 1. Cameroon 2. The Democratic Republic of the Congo 3. The Central African Republic 4. Burundi

Displacement has been a big issue across Africa mostly arising from politics and related insecurity. The NRC averred that the basis for neglect rests on three main matrices.

Why the NRC publishes the annual report

Every year, the Norwegian Refugee Council (NRC) publishes a list of the ten most neglected displacement crises in the world. This is the list for 2018.

Although humanitarian assistance should be based on needs, and needs alone, some crises receive much more attention and support than others. Why is one person’s suffering an international priority – resulting in conferences, mediation efforts and donations – while another person’s suffering, in another part of the world, goes unnoticed?

This neglect can be a result of a lack of geopolitical interest. Or the people affected may seem too far away and too difficult to identify with. Neglect can also be a result of competing political priorities and a lack of willingness to compromise, creating a protracted crisis and growing donor fatigue.

Our goal, in issuing this list, is to focus on the plight of people whose suffering rarely makes international headlines. People whom politicians have forgotten or disregarded. People who currently do not receive the support and protection they deserve and need.

We believe that more information and knowledge about these people, and the crises surrounding them, is a first important step towards change.

We have created our list based on the following three criteria: lack of political will, lack of media attention and lack of economic support. All* displacement crises resulting in more than 200,000 displaced people have been analysed – 36 crises in total.