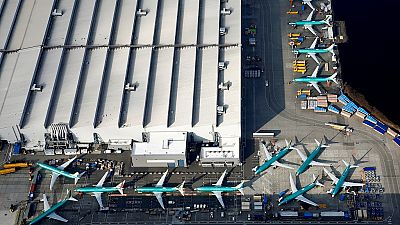 American plane maker Boeing says it will tailor its compensation to airlines for the 737 MAX grounding around customer preference, and might actually pay back in services rather than cash.

Boeing’s planes of the model in question were grounded all over the world after an Ethiopian Airways Boeing 737 MAX 8 crashed killing all 157 people on board, less than five months after a similar disaster involving a Lion Air 737 MAX 8 that killed all 189 people on board that plane.

The company’s Chief Executive Dennis Muilenburg said on Wednesday the compensation could include tweaking plane delivery schedules, or offering additional training or services, as well as cash in some cases.

“We know we’ve impacted the summer schedules for many of them, and it’s difficult, it’s painful,” he said, speaking at a New York investor conference.

“I don’t see this as an additional material event for us, but it’s something that’s going to require individual attention customer by customer.”

Muilenburg acknowledged that the MAX crisis had shaken public confidence in the company and inconvenienced key customers, but the company is unlikely to take a big financial hit.

The efforts to return the plane to the skies has taken longer than expected, so the timeframe for resuming flights on the troubled planes appears to be slipping further.

Alexandre de Juniac, head of the International Air Transport Association, said Wednesday the plane will remain grounded “at least 10 to 12 weeks” while regulators review Boeing’s proposed fix to a software problem that has been linked to both crashes.

Muilenburg described last week’s meeting of international regulators as a “key” event in returning the plane to service, but acknowledged that it may take more time before global regulators are ready to approve the plane’s return.

He said the company continued to cooperate with US Federal Aviation Administration information requests.

“Our hope is that we’ll have a broad international alignment with the FAA,” he said at the conference.

“But there may be some international authorities that will operate on a different schedule. So we’ll have to tailor our plans, depending on the regulatory approval to get the airplane back up and flying.”

The FAA will be the first regulator to clear the plane for service, but aviation analysts say the agency wants at least some other countries to approve the plane soon after.

SUGGESTED READING: Inside the lawsuits against Boeing over Ethiopian Airlines crash