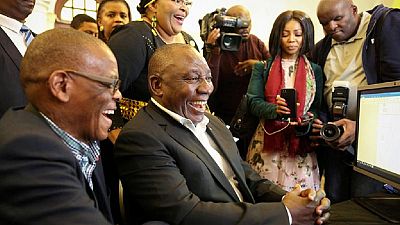 South Africa’s incoming president Cyril Ramaphosa has spoken about the composition of his new cabinet after registering as a Member of the sixth parliament on Tuesday.

The next parliament is due to be constituted today (May 22) exactly two weeks after the May 8 national elections which the ruling African National Congress, ANC, he leads won with 57% of valid votes cast.

The electoral configuration in South Africa is such that the party with the highest number of seats deploys one of their own parliamentarians to become president. Ramaphosa took over from Jacob Zuma in February 2018 and led the ANC into the polls.

No, not sleepless nights, it's the work that we have to do and everybody knows that we have got to do this work and that is precisely what we are working on now.

One of the main issues post the elections has been the issue of his cabinet, asked whether the task ahead gave him sleepless nights, he replied in the negative. He stressed that the team will be one that will have the right mix to help realize the plans the ANC sold to voters.

“No, not sleepless nights, it’s the work that we have to do and everybody knows that we have got to do this work and that is precisely what we are working on now.

“And we will present an outcome that – I think – our country will welcome, will be pleased with, because it will have a very good balance of gender, youth, competence, demographic, regional spread and all that.

“So that is what we are going to seek to do. So you wait and see, watch this space,” he told the press in Cape Town as he went through processes of registration along with other lawmakers. The presidential inauguration is slated for May 25 according to government.

Registering as Member of Parliament for the 6th administration #6thParliament https://t.co/BKnwZbCQia