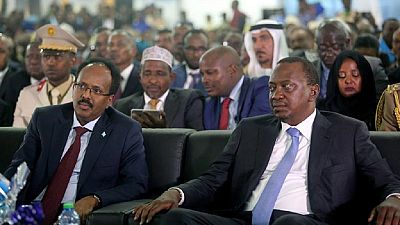 The Somali government has officially responded to the latest installment of Kenyan pressure in the midst of a rolling diplomatic row over maritime boundaries.

Earlier this week Somali government officials – a minister and two Senators were
denied entry into Kenya despite presenting diplomatic passports at the airport. They were traveling to Nairobi for official duty.

The trio are reported to have been detained at the Jomo Kenyatta International Airport, JKIA, and forced to return to Mogadishu. Before this incident, Kenya ordered mandatory two-tier checks for persons travelling from Mogadishu to Nairobi.

In a letter by the Ministry of Foreign Affairs, the Somali government said: “The actions contravene the neighborly bond that exists between Somalia and Kenya. the Government of Somalia therefore calls on the Government of Kenya to consider the potentially destabilizing impact of these actions and uphold the longstanding relations between our two nations as well as the diplomatic norms in the spirit of reciprocity and mutual respect.”

Mogadishu stressed that on its part, it was committed to maintaining all mutual and friendly relations for all Kenyans – officials and citizens alike.

In February this year, Kenya summoned its ambassador to Somalia, saying it was protesting a decision by the Mogadishu government to auction oil and gas exploration blocks at the centre of a maritime territorial dispute in the Indian Ocean.

The International Court of Justice (ICJ) in The Hague is considering a claim by the two neighbours over a common maritime boundary. The case was brought by Somalia in 2014 after negotiations over the 100,000 square km stretch of sea floor broke down.

Abiy’s flew with Somali president from Addis Ababa to Nairobi with his office saying after the meeting: “As an outcome both agreed to work towards peace & to take measures in addressing particular issues that escalated the tensions.”